In American Wood Type 1828–1900, Rob Roy Kelly writes the history of the major American wood type manufacturers of the nineteenth century. He describes James Hamilton as an “aggressive businessman” buying out his competition starting with the William H. Page Wood Type Co in 1891. While true—the sale was finalized on January 4, 1891—Kelly simplifies the subtleties of the situation.

Hamilton started his business in 1880, and by 1887 was undercutting the competition with cheaper Holly Wood Type made with his veneer method of production. Situating the company in Two Rivers, Wisconsin gave him direct and easy access to the necessary raw materials quicker than the competition on the east coast. Perhaps most importantly from a business perspective, Hamilton was also assiduously developing a robust national network of distributors for his products that far outpaced the networks developed by his competitors. These three factors combined to give Hamilton the commercial edge needed to surpass the established eastern wood type manufacturers, and would allow Hamilton to effectively monopolize the manufacturing business by the end of the century.

While it is not necessarily clear who initiated the buy-out talks, this letter, from William Page to William Baker (Hamilton’s business partner at the time), clearly indicates that it was the William H. Page Wood Type Co that pursued the merger. The letter also includes interesting details of his company’s prior acquisition of John G. Cooley’s wood type manufacturing concern in 1869. 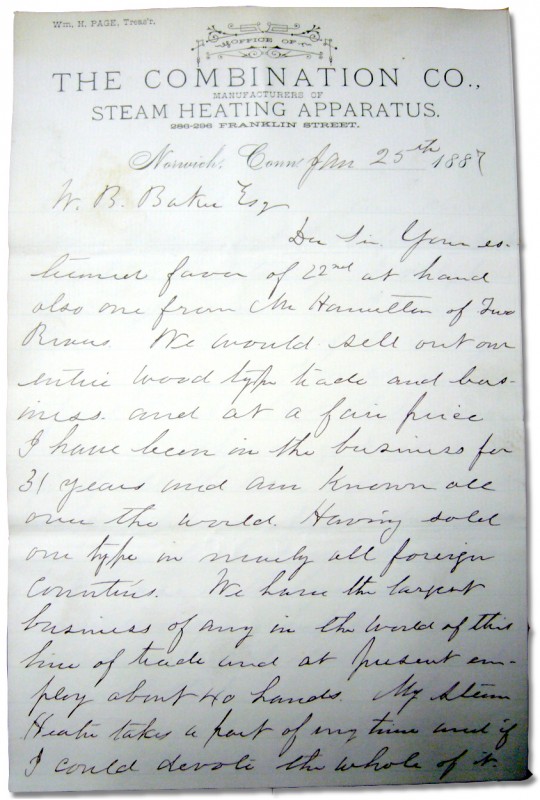 Dear sir, Your esteemed favor of 22nd at hand also one from Mr Hamilton of Two Rivers. We would sell out our entire wood type trade and business and at a fair price. I have been in business for 31 years and am known all over the world. Having sold one type in nearly all foreign countries. We have the largest business of any in the world of this kind of trade and at present employ about 40 hands. My Steam Heating takes a part of my time and if I could devote the whole of it

I could do better. I can make some money out of it if well funded, while it is taking. I only have New England on it as I have disposed of the rest of the country in a royalty, so I could not take it West. But the Wood Type business should go West as ¾ of all the trade now is West. Our facilities are first class and we have the best machinery ever put to use in the business. We have two years supply of raw material which of course must go with the business. About 16 years ago we bought out the Cooley Wood Type Works in New York

and paid him $30,000 but we have only left of that purchase a “Daniel Planer”{1} His machinery was too antique for us and his patterns were only duplicates of ours so we burned them for fire wood we did this to get him out of the way. It paid us well enough.
We might wish to retain an interest in the business if agreeable. Mr Setchell my partner who has been with the business since the War{2} in could go out with it and perhaps some of the help but not all probably. Although it is a new idea (selling out) we will do so if satisfactory terms can be ar-

ranged so it will be mutually agreeable all around.
If we should not sell out it better be confidential between us. If we should of course it will be known. If Mr. Hamilton is a practical man he had better come out here and look and talk this thing over. It takes some capital to put our heater properly on the market and that is our reason for selling out this one.
Shall be pleased when _____ from grace.