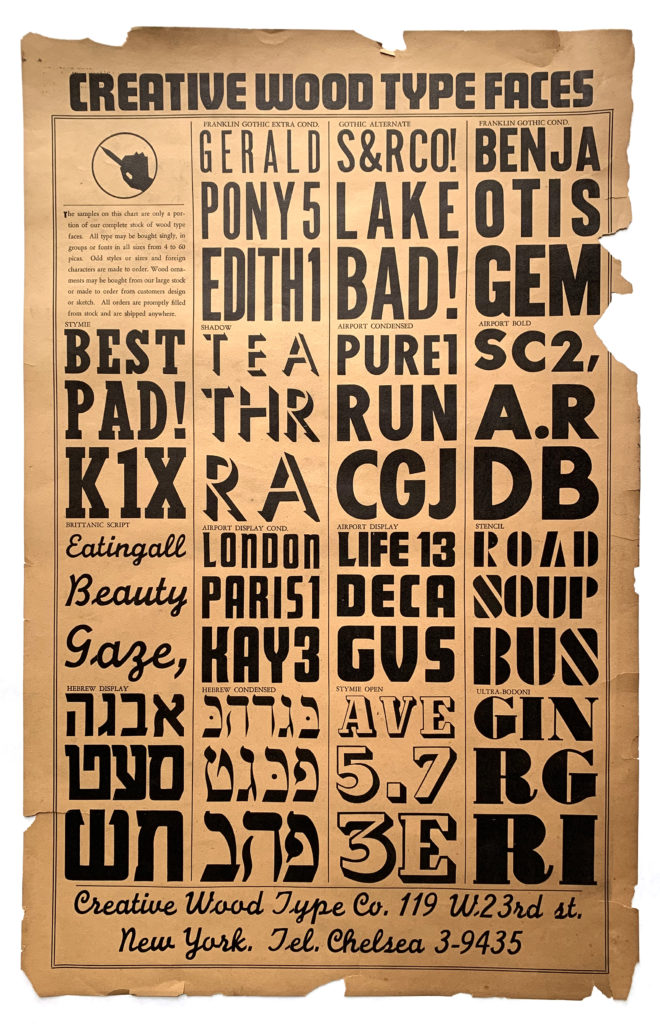 The broadside measures 14 × 21⅞″and is printed single-sided in black ink on tan stock. The specimen shows 15 different faces (listed alphabetically below) the company offered, with the printed texts indicating that the faces shown were “only a portion of our complete stock of wood type faces.”

This particular broadside may likely be dated to have been published sometime after 1948, but no later than the early 1960s. The earlier date of 1948, is indicated by one of the faces shown on the broadside. Creative’s cut of Stymie Open appears to match a foundry face named Stymie Bold Open. Mac McGrew, in American Metal Typefaces of the Twentieth Century, ((McGrew, Mac. American Metal Typefaces of the Twentieth Century. 2nd ed. United States: Oak Knoll Press, US, 1993. 296–297, 346.)) stated that “ATF literature lists a Stymie Open, but no specimen or other evidence of it has been found. … Stymie Bold Open offered by Baltimore [Type Foundry] is a copy” of the Bauer Foundry’s Benton Bold, and was first shown around 1948.

The later date of early-60s is indicated by the format of the telephone number included on the broadside. The number indicated is CHelsea 3-9435. The two-letter five-digit phone number was adopted in the early 1930s in New York City. The city changed its telephone exchange again in the early 1960s to comply with Bell Systems updated North American Numbering Plan that included a seven-digit local number format, thus dropping the use of letters in the phone number.

There are some further hints that indicate the company may have been in business until 1953, but are not able to be substantiated as of this posting. Further research will be required to describe with more accuracy the history of the company, but the specimen evidence clearly adds another manufacturer to the list of known American wood type manufacturers.