On page 62 of American Wood Type 1828–1900 ((American Wood Type, 1828–1900: Notes on the Evolution of Decorated and Large Types and Comments on Related Trades of the Period. New York: Van Nostrand Reinhold Co., 1969.)) Rob Roy Kelly makes a passing reference to the existence of several wood type manufacturers using the name American Wood Type. Kelly’s text only detailed the one manufacturer working in the 19th century.

The nineteenth century American Wood Type Co described by Kelly was founded by Charles Henry Tubbs. Tubbs left the employ of William H. Page to start his company in South Windham, Connecticut in 1879. The company changed it’s name to Tubbs & Co in 1902 and then to Tubbs Mfg Co in 1905 when Charles Tubbs sold his interests to four employees who moved the company to Luddington, Michigan. Tubbs Mfg Co was in business until 1909 ((Tubbs Mfg Co company was purchased by The Hamilton Mfg Co in June, 1909 after a contentious court battle in 1908.)).

The earliest confirmed appearance of Mandel’s American Wood Type Mfg Co in print is an ad in the July, 1933 issue of The Graphic Arts Monthly.

The earliest known specimen catalog was published in January, 1934. This date is corroborated by an ad for the catalog in the February, 1934 The Graphic Arts Monthly. 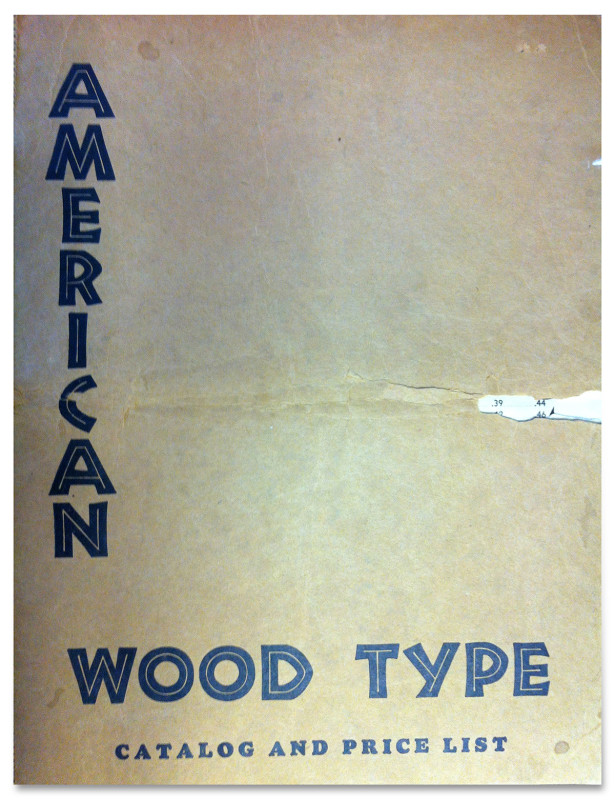 The catalog is 10½ × 14 inches with 18 spiral-bound pages plus cover. The interior is printed black on off-white uncoated stock and the cover is printed 1-color on 14-ply chipboard. An imprint on the inside back cover indicates that the catalog was bound by Spiral Binding Co, New York. The catalog includes 26 different styles of wood type, predominantly jobbing Gothics, but also included 4 styles of Cooper, 2 styles of Rugged (their name for Neuland), a Slab Serif and Fat Face Roman as well as 2 styles of Hebrew script. Sizes shown range from 6-line to 24-line, and the price list indicates sizes could be cut to in excess of 100-line. 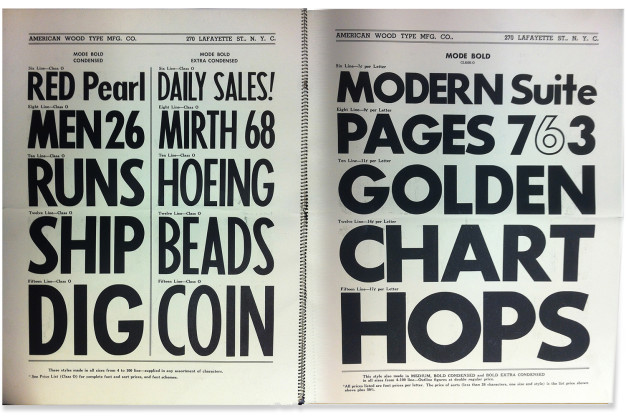 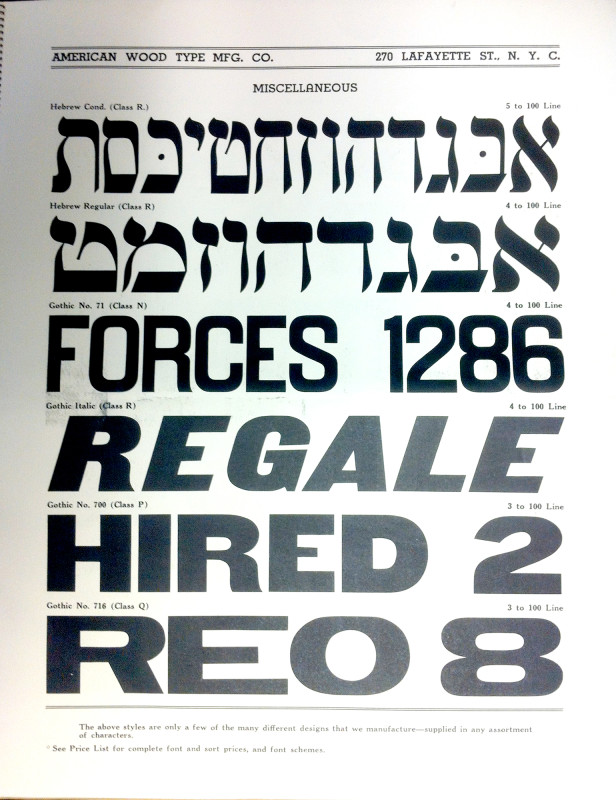 American Wood Type Mfg Co produced a number of catalogs including the 1936 Catalog No 36 and the 1939 Catalog No 39. Between 1956–2000, American Wood Type Mfg Co published a catalog of all the companies offerings in wood type and printing equipment and supplies every other year. Many of these serial publications are held in readily accessible library archives around the country.

After wood type manufacturing was halted in 2001 the equipment and templates were sold off and changed hands in the early 2000s. Bill Jones traveled to Cincinnati, Ohio and bought approximately 100 crates containing original patterns for roughly 100 typefaces as well as a large pantograph ((About Virgin Wood Type)) and used this purchase to established the Virgin Wood Type Company in late 2010 in Rochester, New York ((Tragically Bill Jones passed away on November 6, 2012 after an heroic struggle with cancer (Bill’s legacy) )). It is believed that the balance of the equipment remains stored in Ohio and unconfirmed reports indicate that some items were donated to the Smithsonian and to a collection at Yale University.