Charles Henry Tubbs, a type maker for William Page and a founding partner of the American Wood Type Co, was born January 13, 1842, in New York City to Joseph Tubbs and Jane Sloat. 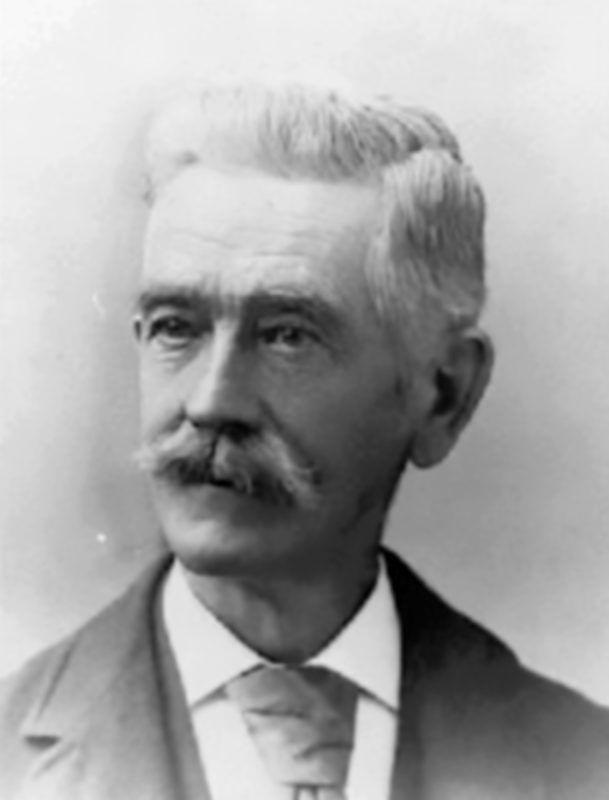 When ill health caused Joseph Tubbs, a brick and stone mason, to retire from his successful contractor and building business in New York City, he moved the family to a farm between Lisbon and Hanover, Connecticut. Here Charles spent his childhood.

In his youth, Charles Tubbs went to school and helped work on the family’s farm. In 1856, his father passed away. Sometime between 1856–1859 his mother, Jane moved the family seven miles south to Norwich, Connecticut where she ran a boarding house. Charles entered into an apprenticeship as a painter with his uncle, William Tubbs, starting at the age of 17. This apprenticeship appeared to have been short-lived, as soon after he was hired, as a type maker, by William Page of the William H. Page & Co in Greenville, Connecticut. Rob Roy Kelly ((Kelly, Rob Roy. American Wood Type: 1828–1900, Notes on the Evolution of Decorated and Large Types and Comments on Related Trades of the Period. New York: Van Nostrand Reinhold Company, 1969: 46.)) indicated that Tubbs started with Page in 1860. The Norwich City Directory didn’t list Tubbs until 1862 when it showed him living at his mother’s boarding house on Franklin Street. The discrepancy may be accounted for in A Modern History of Windham County, Connecticut where it stated that shortly after being hired by William Page, Tubbs “spent a year in New York city but afterward returned to Norwich and took up the business of steel engraving in connection with wooden type manufacturing.” ((Lincoln, Allen B., ed. A Modern History of Windham County, Ct: A Windham County Treasure Book. Chicago: S J Clarke Publishing Co, 1920: 1605–1606.)) It is interesting to note that Tubbs was listed as an engraver by the Norwich City Directory the last five years of his employment with Page.

Charles Tubbs and Josephine Pollard were married April 26, 1863, in Norwich, Connecticut. Their son George Carder Tubbs was born in January 1865. Josephine would die sometime in the late 1860s ((There are conflicting records as to whether Josephine’s name was Pollard or Pollock, and whether she died, or the couple simply divorced. The 1870 Federal Census did not list George Carder Tubbs living with Charles and his new wife Helen Dunkerley, but the 1880 Federal Census did. There is a record of a Josephine Pollock passing away on July 11, 18xx, that seems to correspond with Tubbs.)). In May 1870, Charles married Helen Kershaw Dunkerley. Their son Herbert Henry Tubbs was born in May 1872.

Tuscan Extended, a face very likely designed by Charles Tubbs, one of seven type makers working for William Page in 1867. This from the 1867 Wm H Page & Co’s Specimens of Wood Type, manufactured at Greenville, Conn., held in the Kemble Collections on Western Printing and Publishing, California Historical Society.

Charles Tubbs, John Martin, and George Kies left the William H Page Wood Type Co in 1878 to start American Wood Type Co. They moved into the factory in South Windham, Connecticut originally built and used by Edwin Allen to manufacture wood type 1837–1852. The partners seemed to have had the good will of William Page, as they set up shop with three cutting machines ((“Notice,” The Willimantic Chronicle (Willimantic, Connecticut: McDonald & Safford), November 16, 1881. http://www.ctgenweb.org/county/cowindham/records/newspaper/willimanticchronicle/june1883.html)) and nearly 200 type patterns ((Kelly, 46)). 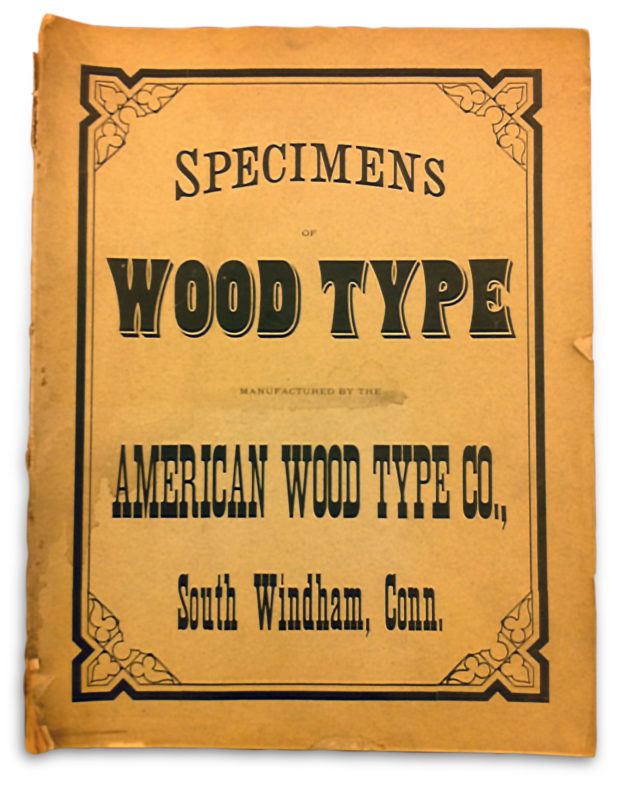 In May 1883, Charles Tubbs bought out the interests of Martin (( John W Martin, a year after the buy-out, was listed as a pattern maker in the 1884 Willimantic Borough Directory. The 1900 Federal Census listed him in Hampshire, Massachusetts as a machinist. After his wife Ellen Rockwell passed away he moved to California to live with his daughters. Martin died in 1921 as a resident of Los Angeles. John W Martin worked for William Page 1867–1878.)) and Kies ((George Lyon Kies returned to work as a type maker for William Page. Kies was listed in the Norwich City Directory as a type maker starting in 1885. He stayed in Norwich after the Willian H Page Wood Type Co was acquired by J E Hamilton and moved to Two Rivers, Wisconsin. Kies carved gun stocks from wood for The W.H Davenport Fire Arms Co. George and Julia Kies both died in Norwich in 1928. George L Kies worked for William Page 1867–1878, and c.1883–1891.)) and took sole ownership of the company. He continued the company under its original name.

There is little-known information available on the activities of Tubbs or the American Wood Type Company for the next two decades. Rob Roy Kelly indicated that the company employed 17 people during this period ((Kelly, 46)). Two subtly different specimen catalogs were published in the mid-1880s that marked a transition from a type naming system to a type numbering system used by the company.

George Carder Tubbs ((George Tubbs was married to Eva Backus in 1889, and that year, in December they had a daughter, Florence. Eva Backus passed away in early 1893 apparently during childbirth of a son who also passed. Tubbs married Annie Smith in November 1893. In 1897, the family moved to Hartford, Connecticut, where George worked as a Rail Road Engineer. The 1900 Federal Census listed them in Boston, Massachusetts. He became a Mason in 1905. The 1910 Federal Census listed George as a proprietor of a deli in Boston. Their daughter Florence died in 1918. George passed away in May 1920. Eva moved to Norwich, Connecticut, living there until May 1940.)), Charles’ son by his first marriage was a wood type cutter for American Wood Type Co as of 1887, and was also an employee again 1895–1897. Herbert Henry Tubbs ((Herbert married Lila Christine Woolworth on Dec 12, 1908, in Norwich, Connecticut. After he finished working for his father in 1904, he was employed by a manufacturer of paper machinery; by 1911 he was working for the American Thread company; and, the 1920 Federal Census listed him as working for a tool factory. Herbert and Lila had a son, Herbert T Tubbs who worked as a stereotyper for the Hartford Currant. Herbert Henry Tubbs died in 1941.)), Charles’ son by his second marriage, was also an employee of the American Wood Type Co 1890–1904, though it is not clear the nature of his work for the company. 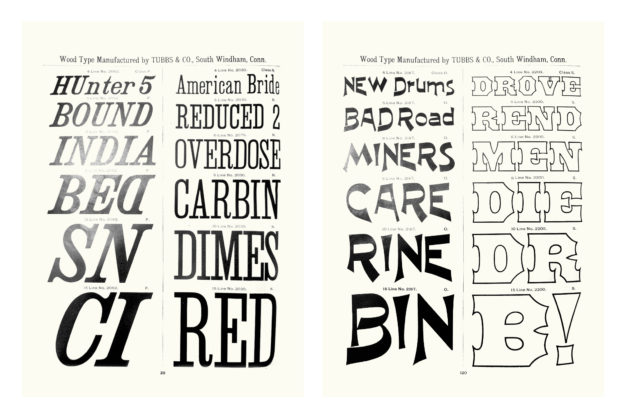 In 1902, American Wood Type Co became Tubbs & Co of South Windham, Connecticut. Charles Tubbs was still in charge of the company and no other changes to the company are yet know. A new specimen catalog was released sometime in 1903.

In December 1904, four men bought all interests in Tubbs & Co from Charles. Kaufmann ((Frank Kaufmann had been a foreman for JE Hamilton for 20 years and would act as the superintendent of the new company.)), Kurtz ((Mr Kurtz had been a foreman for JE Hamilton for 23 years and would head the case department of the new company.)), Bashelier ((F M Bashelier, who had worked as a salesman just previously for Barnhart Brothers & Spindler in Chicago, would act as general manager.)), and an (as yet) unnamed Type Designer ((The unnamed type designer had been in the profession for 14 years, and may possibly have been a Mr Gagnon, a draftsman and designer for Hamilton named in the 1908 court case.)), renamed the company the Tubbs Mfg Co and moved all equipment and materials to Ludington, Michigan ((801 North Rowe Street, Ludington, Michigan. The building was originally built by the piano manufacturer, Mendelson Manufacturing Company, in 1892.)).

Charles Tubbs lived out his retirement with his wife Nellie at their home in South Windham. He passed away, November 2, 1907, and is buried in Windham Cemetery. She died in 1926 and is buried with him on the family plot. 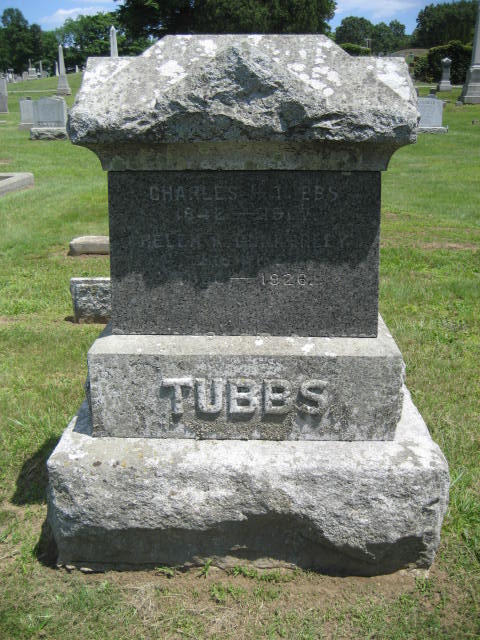 Lincoln Allen wrote of Tubbs that, “[i]n business he displayed close application, indefatigable energy, and industry that never flagged, and his thorough reliability was also a salient feature in his growing success. The worth of his character and his business enterprise made him a substantial and valued citizen of South Windham.” ((Allen, 1606.))