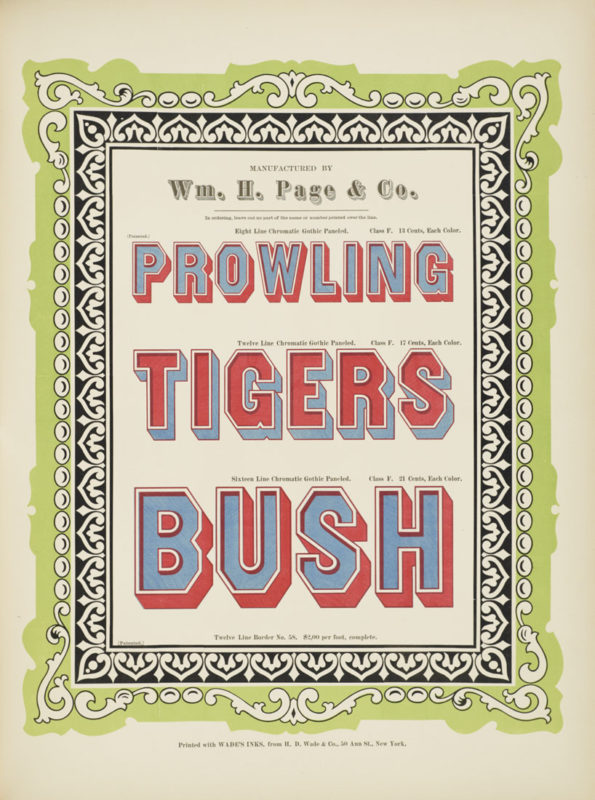 The shaded, chamfered sans serif design named Chromatic Gothic Paneled was first shown as a two-color chromatic ((Chromatic types were designed to print a letterform in two or more colors simultaneously. These types, produced in register as corresponding pairs, were designed so that when printed one color would overlap another in certain places to create a third color. Chromatic types were shown regularly in foundry type specimen books of the 1840s and 1850s. Chromatic types were first produced as wood type by Edwin Allen, and shown by George Nesbitt in his 1841 Fourth Specimen of Machinery Cut Wood Type. Both William H Page in 1859, and J G Cooley in c.1859 showed multiple examples of chromatic type in each of their wood type specimen catalogs. Page showed these types in most of his company’s specimen catalogs in the 1870s. The high point of chromatic wood type production came in 1874 when William H Page & Co issued their 100-page Specimens of Chromatic Type, Borders, &c. Though Hamilton, Morgans & Wilcox, and Heber Wells all showed samples of chromatic types through the rest of the century, none of these ever reached the level of intricate precision attained in Page’s 1874 masterpiece.)) in Wm H Page & Co’s 1874 Specimen of Chromatic Wood Type, Borders, &c. The schematic design, from which Chromatic Gothic Paneled was derived, was patented March 3, 1874 (filed Jan 5, 1874) as US Design Patent No 7,230 by William H Page. The patent displayed the underlying organizational structure of the design, providing the flexibility to produce a robust series of variations. This recursive approach created opportunities for the deployment of complex systems of subtle typographic modifications that produced a rich variety of visual expression. While not a direct influence on the variable font technology developed in the twenty-first century, this nineteenth-century approach indicated in Page’s patent application does provide an early example of parametric thinking in typeface design. 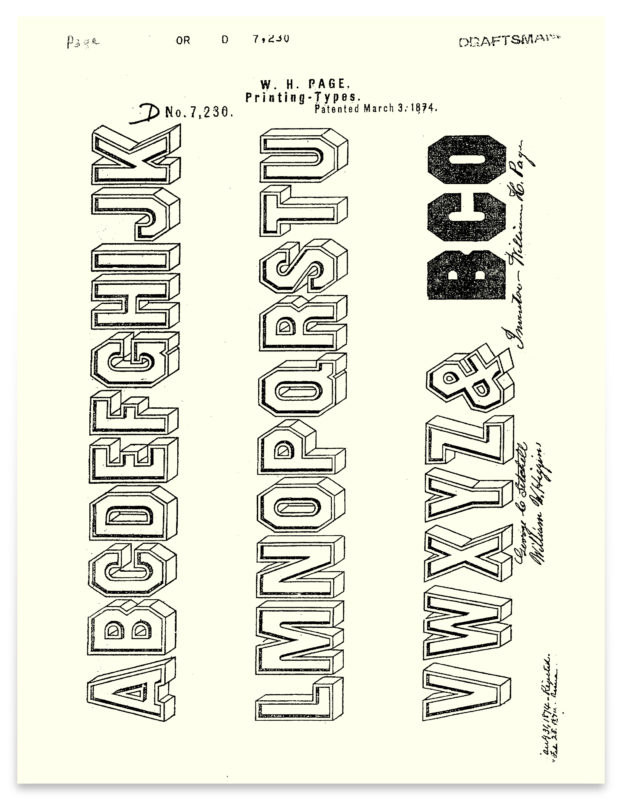 The description of the design included in the patent application stated that “[t]his design consists of a Gothic letter with shade, and having an inside panel sunk into the face of the letter, which is also shaded, thus leaving a narrow raised border around the outside and inside of the letters. These letters also have their curved parts upon their outer sides beveled in an octagonal form, while the inner parts remained curved … thus presenting a new combination of beveled and round parts….” 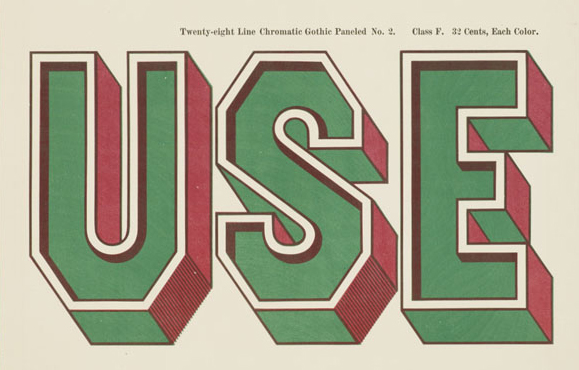 Page showed a streamer ((Streamers were a variation on Reverses. Reverses were letters cut into a decorative or solid ground to give the semblance of a letter knocked out of a colored field. Streamers were reverses that also included terminating ornamental blocks used to produce a finished shape with the visual appearance of a long narrow banner, flag, or pennant that held reversed letters. Edwin Allen, in George Nesbitt’s 1838 specimen catalog, showed Black Ground the first reverse design in wood. J G Cooley showed a kind of chromatic reverse in c.1859 as a single color-filled border used as a background for overprinted type. Hamilton & Katz also showed a similar design in 1884. Rob Roy Kelly noted in American Wood Type that “the printer could assemble [the borders] … print in color, and then overprint in black with conventional wood types.” The first fully-realized wood type streamers were introduced by Wm H Page & Co in their 1874 Specimens of Chromatic Wood Type, Borders, &c.)) version of Chromatic Gothic Paneled named, fittingly, Chromatic Streamer Gothic Paneled. The design did not include Chromatic Gothic Paneled’s external shade portion of the letterforms but knocked the portion of the letter with the inside panel sunk into the face out of the banner element. The second color was a plain-faced inset used for the chromatic overlay, this part was shared with Chromatic Gothic Paneled No 1. 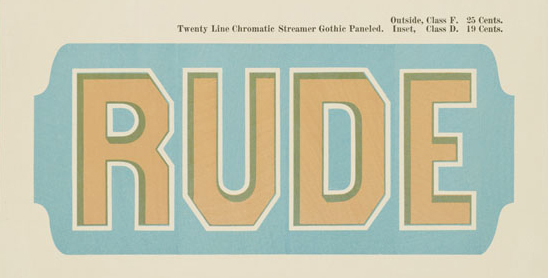 In subsequent specimen catalogs, starting with the 1876 Poster Specimens from the Wm H Page Wood Type Co, different configurations of the patented design were shown as single color — non-chromatic — versions. The single color variations were all assigned new names. One part of the two-part Chromatic Gothic Paneled became a single color option renamed Paneled Condensed. The second part of Chromatic Gothic Paneled was offered (though not until the 1882 specimen catalog) as a single color option named Paneled No 3 ((It is unclear why the word ‘condensed’ was left out of this particular name configuration.)).

In another variation, the two separate components of Chromatic Gothic Paneled were combined to produce a single color amalgamation. This variant was named Paneled Condensed No 1.

In the 1882 Specimens of Wood Type and Borders Page showed the non-chromatic No 148, which was an unaltered version of the schematic design presented in the design patent application of 1874. 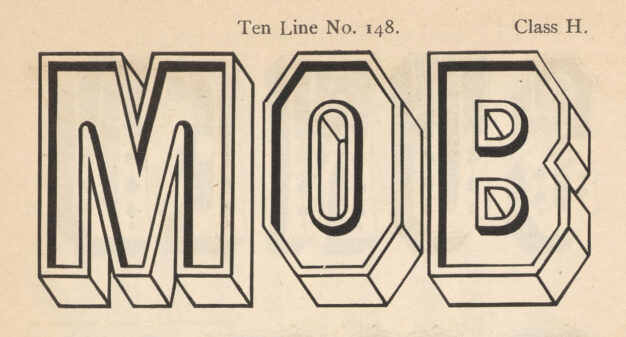 Page offered the two parts of Chromatic Gothic Paneled No 2 individually as No 185 and No 186 starting in 1887.

In all seven one-color designs and three two-color chromatic designs, as well a one one-color streamer, and one two-color chromatic streamer were offered by the Page companies (Wm H Page & Co and the Wm H Page Wood Type Co). All twelve design variations were derived from the original patent schematic and released over a thirteen-year period.

After The Hamilton Mfg Co acquired the William H Page Wood Type Co in 1891, the names of the faces were changed to fit into Hamilton’s numbering system. It seems that Hamilton offered both the single color and the chromatic options of the designs, though never explicitly showed the chromatic options in its specimen catalogs. Paneled Condensed became No 481, Paneled Condensed No 1 became No 490, and Paneled No 3 became No 467. Streamer Gothic Paneled was renamed No 377 ((Panelled [sic] Condensed (Hamilton No. 481) Panelled [sic] Condensed No 1 (Hamilton No. 490) Panelled [sic] No 3 (Hamilton No. 467) were listed in the 1891 Alphabetical List of Page’s Name & Numbers with the Hamilton Mfg. Co.’s Numbers for Same.)) and Hamilton also offered a double lined streamer variant named No 145.

Origins of the plain-face and other American manufacturers

Rob Roy Kelly noted in American Wood Type 1828–1900 that William Leavenworth first showed a chamfered (angled-corner) plain-faced style in about 1837 (c.1836–1838 Specimen of Leavenworth’s Patent Wood Type, Manufactured by J. M. Debow, Allentown, N. J.) named Gothic No 2. These chamfered visual characteristics were also applied to the condensed Antique/Egyptian pattern and referred to as Grecian, which was popular from the late 1830s to the 1850s. The visual alteration to the Gothic pattern shown by Leavenworth did not gain wide popularity in America until the late 1870s. During the last quarter of the nineteenth century, most American manufacturers showed a variation of the plain-face design.
Hamilton — Gothic Condensed No 6 or No 205 (as early as 1889).
Morgans & Wilcox — Gothic No 2 (as early as 1889), later Hamilton No 3080.
National Printers’ Materials — Block Gothic (as early as 1887).
Page — No 133 (as a stand-alone design as early as 1880), later Hamilton No 4205.
Tubbs (AWT) — Gothic No 2 or No 2057 (as early as 1887) and Ancient Gothic in 1905.
Wells — Gothic Condensed Light Face No 2 or No 248 (as early as 1886), later Hamilton No 5080. 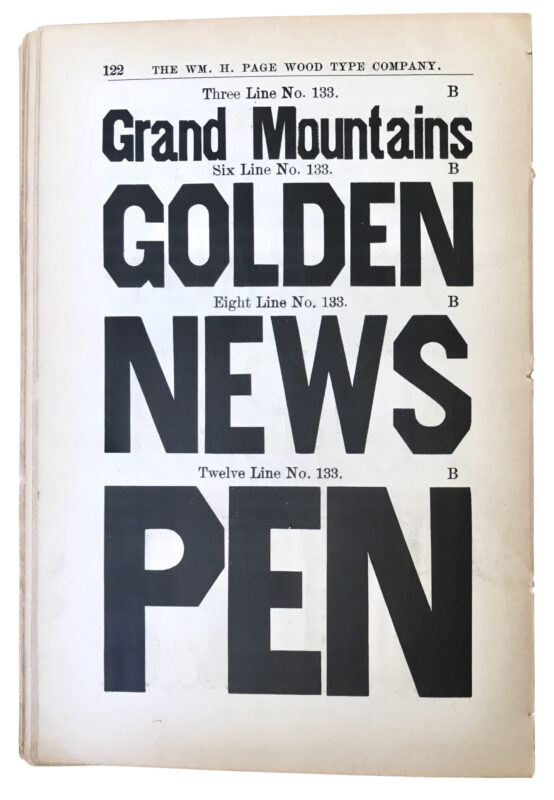 The Hamilton Mfg Co showed an unfilled, outlined version of the plain-face design (based on Page’s No 133) the company named No 210, and an open version of the plain-face design named No 215. It is not clear if either of these faces were acquired from Page, or if they were designed by The Hamilton Mfg Co after the 1891 acquisition. The Morgans & Wilcox Mfg Co offered an outlined variant as Gothic No 2 Open (this curiously was not given a Hamilton number after the company was acquired in 1895). Tubbs offered an outlined variant as No 2202. 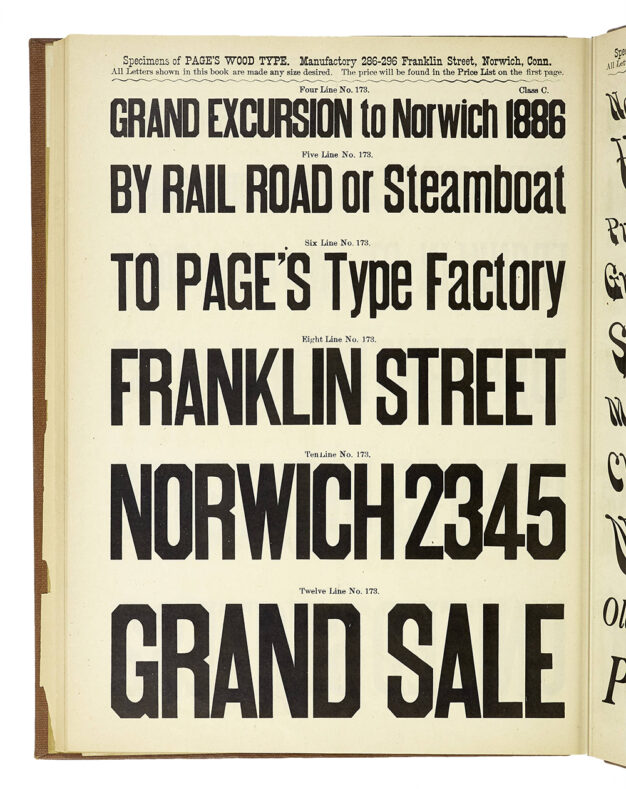 An extended variation of the plain-face design was shown by The Hamilton Mfg Co named in 120. The Morgans & Wilcox Mfg Co also offered a cut of the extended variation, though it does not appear in any known surviving specimen catalogs. It was renamed No 3081 after the Hamilton acquisition of 1895. The Hamilton Mfg Co also offered a unique light weight variant of the plain-faced design named ‘Special’ or No 6178 in 1906.

The Hamilton Mfg Co was the last American wood type manufacturer to show any of the variations of the Paneled Gothic series. From the specimen record of known Hamilton catalogs, it does not appear that the company showed any of these design variations after the 1908 Catalog No 17 with the showing of No 205, No 210, No 465, No 467, and No 470.

———–
This was originally posted on 23 February 2017 on this website. It has been updated with text edits, refreshed images, an expanded section for the plain-faced variants, and new imformation about other manufacturer’s offerings.