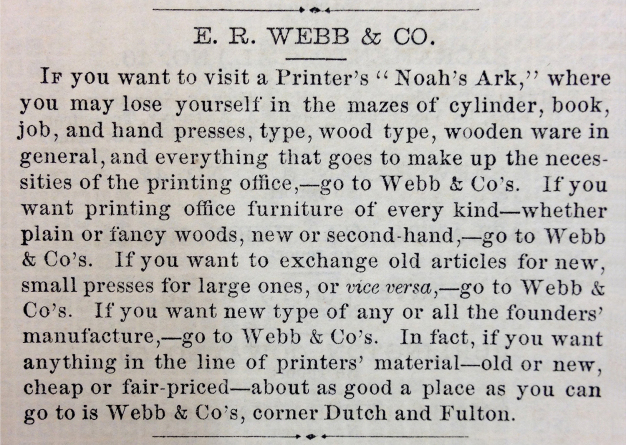 Webb worked as a printer in his youth in Syracuse, and sometime in 1836 became the supervisor ((This position is also referenced as “foreman” or “manager” in different sources)) of William Leavenworth and J.M. Debow’s wood type manufacturing company in Allentown, New Jersey. In 1839, George Bruce bought out the Leavenworth & Debow’s concern “and sold it to Mr Webb on accommodating terms.” ((The Printer, July, 1864, v5 n7, p 103.))

Shortly after this purchase, E.R. Webb entered into partnership with Darius Wells—the inventor of the router and first wood type manufacturer—in late 1839. D. Wells & Co changed it’s name to Wells & Webb, to reflect the new partnership. The Leavenworth & Debow holdings were moved to Patterson, New Jersey and combined with the production facilities from Wells that were moved out of New York City, where they had been located since 1827. It was at this point that the combination router-pantograph that Leavenworth had developed was incorporated into the router system that Wells had invented. Business and sales offices remained in New York City. Webb ran the manufacturing in Patterson, and Wells the office in New York. Though it is unclear why, in late 1842, the partners swapped locations—Webb moved to New York, and Wells to Patterson. The arrangement seemed successful as “His [Webb’s] agreeable manner with customers soon began to tell. The Business prospered…” ((The Printer, July, 1864, v5 n7, p 103.)) 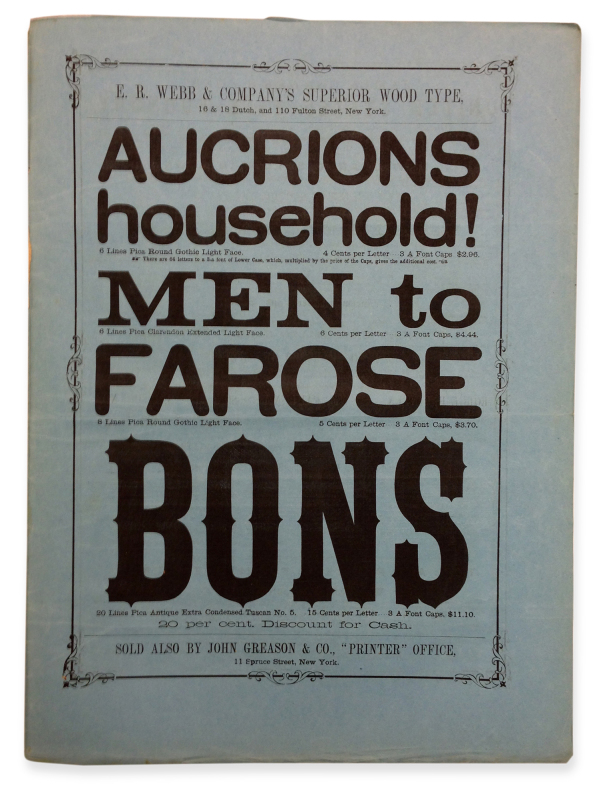 Darius Wells sold his interest in the partnership to Webb in 1854 though stayed on as the manager of the Patterson manufactory until his retirement in 1856. ((Wells, in his retirement, was asked by Abraham Lincoln to serve as postmaster of Paterson, New Jersey—a position he held for 13 years.)) Rob Roy Kelly indicates that Webb bought out the shares of his partners Guy D. Wells ((It should be noted that Guy Dudley Wells (June 21, 1822—Nov 18, 1889) was Darius Wells’ eldest son who worked as an engraver and type maker for D. Wells & Co. It is unclear the nature of his role in the company or when he first started, though Kelly clearly states that he was a partner with Webb in E.R. Webb & Co at least until 1862. The Brooklyn city directory continued to list Guy Wells as a engraver and type maker at the the Dutch Street address until 1887, two years before his death. It seems that much like his father after relinquishing the partnership, Guy D. Wells continued working for the company.)), William Havens and William Titterton in 1862 and changed the name of the company to simply E.R. Webb ((Kelly, Rob Roy. American Wood Type, 1828–1900: Notes on the Evolution of Decorated and Large Types and Comments on Related Trades of the Period. New York: Van Nostrand Reinhold Co., 1969. pg 43.)) 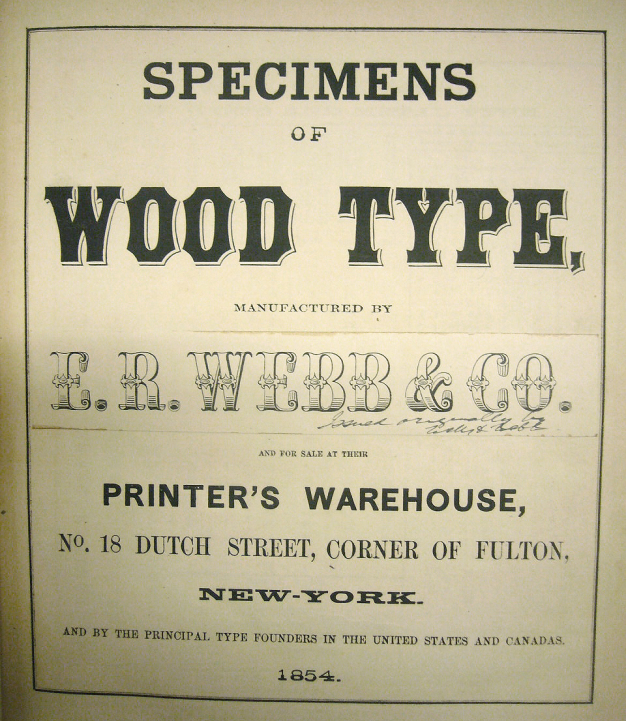 Webb fell ill sometime in 1863 and relocated to Stamford, Connecticut, to convalesce. He passed away in Stamford on Wednesday, June 22, 1864. “To be sure, owing to his illness the past year, and consequent absence from his desk, there was some difference in the actual business; but all this only demonstrates the friendly hold Mr Webb had upon the personal respect of those who delt with his establishment. About a year ago he was attacked with bleeding lungs, which gradually, but surely, undermined his constitution, and finally took him off on Wednesday, the 22d June.” ((The Printer, July, 1864, v5 n7, p 103.))