Glass-Topped Type.
The inventor is ever at work in the endeavor to better, or at least to change, the methods and materials used in printing. Most of the patented inventions, as in other lines of business, are not worth the cost of having them patented, and once the claims of the inventors are allowed in the Patent Office the inventions are rarely heard of again—they lapse into innocuous desuetude.
However this may be, something more than curiosity is directed toward a rather novel invention by a Bohemian, Wilhelm Pilz of Johannesberg, near Gablonz, the centre of the Bohemian glass industry. Pilz, it appears, has made type material a subject of prolonged study and experiment and his plan as it has been described, is to make the body of type of hard rubber or of celluloid, which when locked in the form will resist the pressure without difficulty, and to place glass topped letters—glass being the real face of the type—upon the rubber body, attaching them solidly by means of cement. In order to prevent or obviate any disadvantage arising from the pressure the face of the type is made somewhat smaller than the transverse section of the body, and in this way the touching of the face of the type in the form is prevented.
The claim made for this invention is that the peculiar merit in using glass in this way is that that material will keep its sharpness for a much longer time, owing to its not being subject to the wear that metal is. In our opinion this merit is somewhat doubtful, as glass topped type would be likely to chip off very quickly when thrown into the boxes by the compositor. There are other defects that present themselves, such as the rubber or celluloid body becoming detached from the cement, or the glass from the latter. Metal type is produced rapidly by the casting machine, and though it is not stated how quickly glass-topped type can be made, it is reasonable to assume that its making is a much slower process than is the casting of metal type. Neither does the sanguine inventor tell us how glass-topped type will fare when being planed down. All things considered, we think that type founders will not have a formidable rival in this latest invention, even allowing that it ever becomes of service.

A number of contemporaneous periodicals, including The Typographical Journal, The British Printer and the more esoteric American Manufacturer and Iron World also ran stories about Wilhelm Pilz and his patented process. The Typographical Journal reported that Pilz’s system would “turn out from 100,000 to 120,000 type per day on the three machines necessary to produce his combined rubber and glass type” ((The Typographical Journal (Indianapolis: International Typographical Union, 1897) Febuary 15, 1897, Vol 10, No 4. “Glass type found practicable.” p 141. archived online.)) —an interesting claim if true as 50,000 pieces per day was the standard output at the end of the 19th century. American Manufacturer and Iron World took it seriously enough to report it as “something more than a curiosity…” ((American Manufacturer and Iron World (Pittsburg: National Iron and Steel Publishing Company, 1897) April 2, 1897, Vol 60, No 14. “Glass Type.” p 483. archived online.)) . The British Printer was entirely more skeptical, adding “Curious how this glass type idea revives from time to time!” ((The British Printer (London: Maclean-Hunter, 1897) January, 1897, Vol 10, No 55. “Rubber and Glass Type.” p 15. archived online.)) clearly indicating that glass as a type material was not  a new conjecture at that point in time.

No evidence of an actual manufactured product by Pilz remains for direct examination today. Though the German Patent for this invention remains to be uncovered Wilhelm Pilz appears to be listed as the inventor on several other patents from the mid 1920’s, one which deals with “methods of addressing letter envelopes” (DE402999). Searching the American patent database, there is a US patent (US 1,657,437) from January 24, 1928 granted to Kikujiu Shinohara of Tokyo, for glass type, this invention differs from Pils’ in that the entire body is made of glass rather than just the face.

Shinohara describes two of the many benefits of the glass type, it “not only removes the fear of lead poisoning but gives a sort of sense of pleasure to the men at work because of the transparent nature of the material…” and “the classification of types with reference to the style of characters may be made by imparting simply different colorations to the material composing the printing types.” The patent does not include any manufacturing specifics. 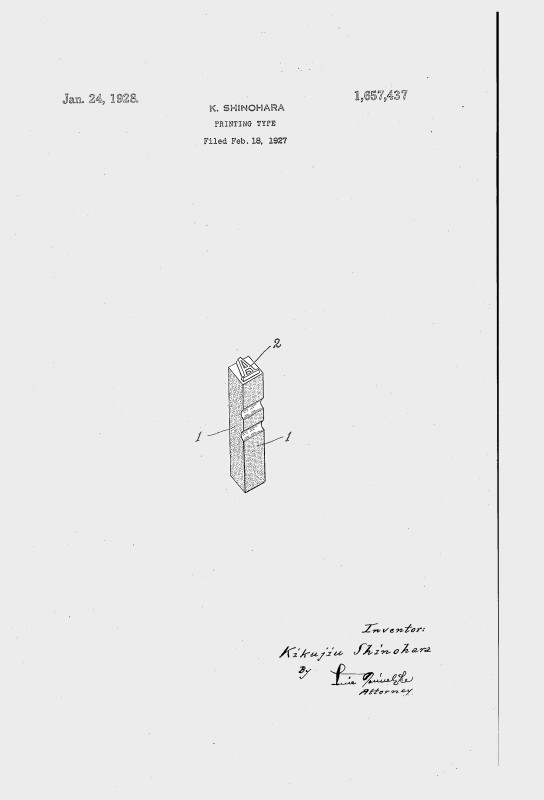