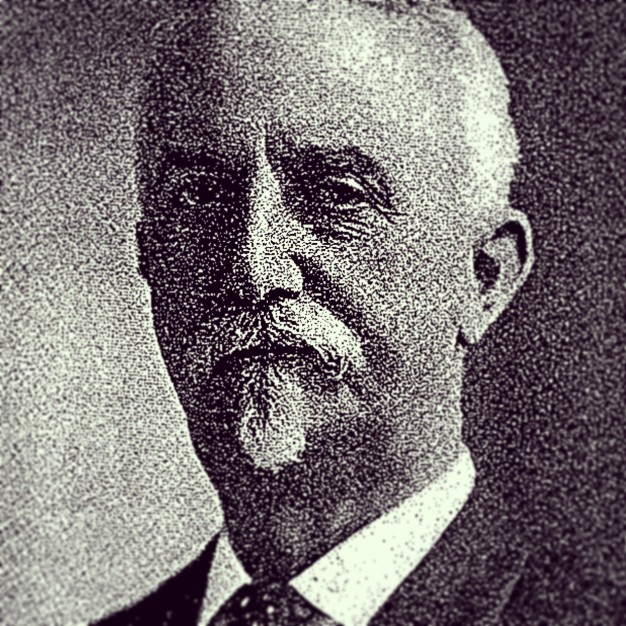 Heber was the youngest son of Darius Wells—the first manufacturer of wood type. He was also an industrious and honest business man, a courageous soldier in the Union army and an active philanthropic member of his community. 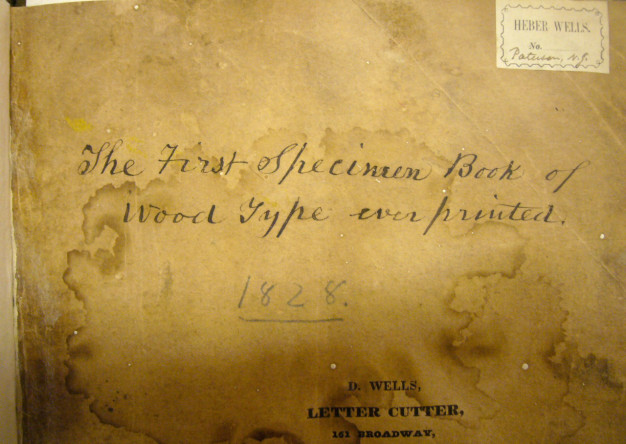 Though born in New York City, Wells spent most of his life in Paterson, New Jersey. As a young man he worked in the composing room of the Paterson Guardian ((The Guardian was established in May, 1856 by Orrin Van Derhoven and Hugh Crowell Irish)). Heber married Sarah E around 1857 and their first child Russell was born in 1858. It is interesting to note that ‘Russell’ was also the middle name of Darius Wells’ partner Ebenezer Russell Webb. Heber and Sarah had four more children by 1876 ((Russell Wells, b. 1858, Ruth Wells, b. 1860, Harriet (Hattie) G  Wells, b. 1863, Eugene Wells, b. 1867, Francis (Frank) S Wells b. 1875.)).

Wells entered the Union army in 1862 as a private when he volunteered into the 13th Infantry Regiment New Jersey, Company K, under the command of Captain Hugh Irish, one of the proprietors of the Patterson Guardian. “Heber Wells, a young man, married and the father of two children…[w]ith his father’s influence and by waiting he could have easily secured a commission, but he went in as a private…abandoning an ideal home life and hopeful prospects…for his country.” ((Bullen, Henry Lewis. “Discursion of a Retired Printer.” The Inland Printer, August, 1907, v39, no5, pg 674–683.))

He had been promoted to the rank of sergeant shortly before the Battle of Antietam ((The Battle of Antietam occurred on September 17, 1862 and remains the bloodiest single-day battle in American history, with a combined tally of dead, wounded, and missing at 22,717)). On that day as the regiment marched into battle, the commanding officer was mortally wounded. Wells rushed to his side, but was unable to save the captain. The regiment fell into disarray. Wells was able to secure Irish’s body and, in the absence of any other ranking officer, took command and rallied the regiment of troops back into battle. “…I have passed through two fights and have come out unhurt. But while thankful for my own preservation, my heart is filled with grief and bitterness for the sad fate of Captain Irish. …looking around I saw the Captain fall. I immediately rushed towards him and supported his head, asking him at the time if he was badly hurt. He could say no more than, “Heber, I am killed,”  a few moans being the only sign from him. I felt his pulse, which was fluttering and then searched for his wound. … During this time my situation was very perilous, as the regiment had recrossed the fence, leaving me alone with the Captain. So I was exposed to the fire of the enemy, as also to the fire from the awkward members of our company, who had to fire over my head to reach the enemy. … What takes so long to write occupied but a short time. …The lines are formed for another fight, and how soon we are to pitch in I do not know.…” ((Civil War Letter from Herber Wells ww.lambertcastle.org/wellsletter.html)) Due to outstanding valor in battle that day Wells was promoted to second lieutenant. 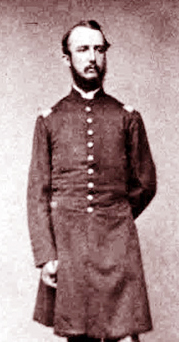 Mrs Irish wrote to Heber after she received word of her husband’s death. “…I have long wished to send you a few lines to tell you and thank you for what you did for my Dear Husband in his last moments. …what will I do all this bleak winter shut-up in the house without ever once seeing Hugh. Oh I am sure my heart will break I think of him all the time how can I help it. … Sarah comes to see me often and How I like to see her come she is so kind to us all. The children are so fond of Heber’s wife as they still persist in calling her I can’t seem to learn them to say Mrs. Wells. … I hope and pray that you will be spared to return to your nice little family. I think of the hardships you have to endure every day and feel very sorry for you. I think you must miss poor Hugh so much. Now except of any heartfelt thanks for all you have done and believe me your well wishes and true friend.” ((The Captain and Mrs. Irish by Susan Irish Loewen www.rootsweb.ancestry.com/~njpchsgc/mil/irish_capt_hugh.htm))

Wells would loose a finger in the Battle of Chancellorsville in May 1863 ((http://dmna.ny.gov/historic/reghist/civil/infantry/13thInf/13thInfCWN.htm)). Though it is as yet unclear how long Wells served in the army, he remained a second lieutenant for the rest of his time in the service and that he had most likely returned to civilian life by early 1864. 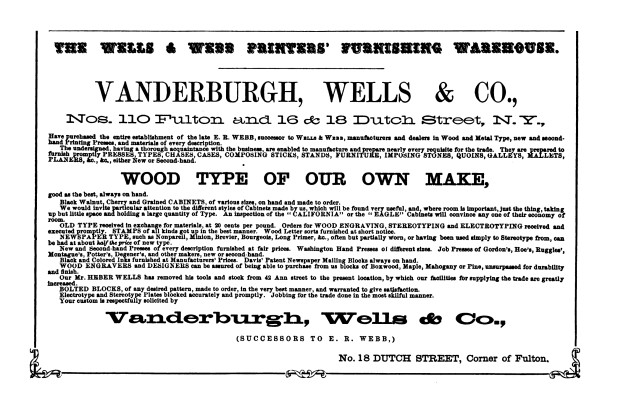 Upon leaving the army, Heber Wells, along with two business partners Alexander Vanderburgh and Henry M Low ((Henry Low was close personal friends of Hugh Irish, Darius Wells and Orrin Van Derhoven)), purchased—for $9,250 ((Kelly, Rob Roy. American Wood Type, 1828–1900: Notes on the Evolution of Decorated and Large Types and Comments on Related Trades of the Period. New York: Van Nostrand Reinhold Co., 1969.))—the wood type manufactory of E R  Webb (successor to Wells & Webb) after Ebenezer Russell Webb’s death in June, 1864. With the death of Henry M Low the following year, Mary Low, Henry’s wife and executress, became partner to Wells and Vanderburgh until her withdrawal from the business in 1887. The company operated successfully as Vanderburgh, Wells & Co until 1890, when Heber took sole ownership. Wells moved the company to 8 Spruce Street in late 1890, and then to 157–159 Williams Street in May 1894. He continued the business under his own name until mid-1899 when he filed for bankruptcy ((July 11, 1899 Trenton Times)). The firm and all of its holdings were purchased by The Hamilton Manufacturing Co. of Two Rivers, Wisconsin later that year. 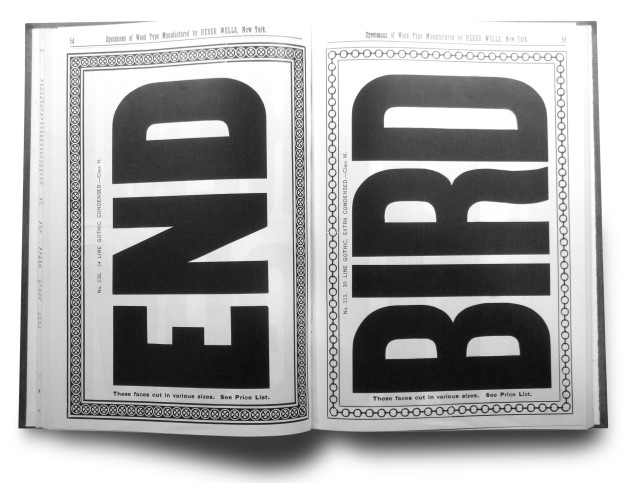 Though his time between returning home from the Army and helping to purchase Webb’s company is not clearly documented, it might be inferred that he started right back to his industrious work habits as his patent—for “useful improvement in securing together wooden blocks for engravers use” ((Wells, Heber. Fastening for wooden blocks. US Letters Patent 43,057, issued June 7, 1864.))—attests. US letters patent 43,057 illustrated the method for bolting together smaller blocks of wood to form a larger engraving surface. The patent is dated June 7, 1864. 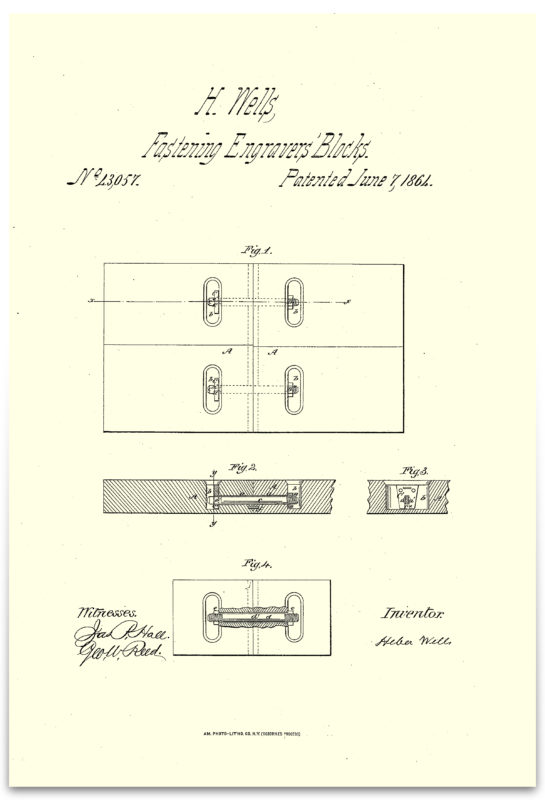 Beyond his business interests, Wells was also an active member of the broader community in Patterson. As an example he was present at the ceremonies dedicating the site of the new Paterson City Hall building on March 26, 1894. He is listed as Grand Pursuivant Heber Wells of Paterson, an attendant at the laying of the corner-stone of the city hall building, conducted with Masonic honors. ((“Exercises at the Laying of the Corner Stone, March 26, 1894.” The City Hall, Paterson, N.J. By Paterson (N.J.). City Hall Commissioner, 1896, pg 18.))

After leaving the wood type business, Wells became a factory inspector for the State of New Jersey for 12 years, and then moved to Malden, Massachusetts in 1913. In a letter to the editors of the New York Times published August 6, 1916 Wells wrote about his thoughts on the merchant submarine Deutschland that had broken the English blockade and sailed to Baltimore Harbor in July “Life upon such a craft, as compared with that upon regular ships, must be next to unbearable on account of the heat, unwholesome air, and other causes even when not submerged…[t]hey are totally unfit for such service.”