The Italian, one of the earliest non-ornamental display types, was first shown in the 1821 type specimen book of Caslon & Catherwood. The face can be quickly identified by the reversal of stress in the characters strokes. The traditionally thick vertical strokes in the roman character have been made thin and the thin horizontal strokes have been made thick. This type form represents a novel, if not radical, visual break from the roman book styles popular in the early 19th century but also from the visual form the roman typographic style had assumed since first being introduced by Nicholas Jenson in 1470’s Venice. 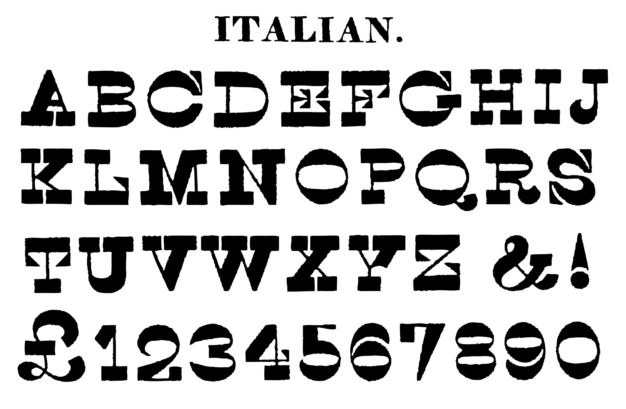 The face was produced both as metal as well as wood type through the 1860’s by multiple foundries and manufacturers in England and Continental Europe and as late as 1885 in America. Though the popularity of the Italian was limited, fifty years after it’s introduction a direct influence can be traced on the popular visual styles of the 1870’s and 1880’s including the French Clarendons and Italian Tuscans.

Typically named Italian, the face was also occasionally referred to as Grotesque Italian or Reversed Egyptian. Though uniformly categorized as an Egyptian (Antique or Slab Serif) by most all written accounts, in Letters of Credit, Walter Tracy uniquely categorizes the Italian as a “Fat Face.” It is a categorization that most unexpectedly helped reveal the origins of its formal construction.

Using Egyptians as a visual starting point consistently stymied my attempts to determine how the idiosyncratic characteristics of the face were developed. Visually analyzing the forms apparent in the Italian and comparing them to a Fat Face rather than an Egyptian, clarified the origins of the visual construction of the type itself. Starting from the Fat Face as an originating point; the main stroke weight was reduced to match the weight of the hairline serifs; the body weight was redistributed to the horizontals and the tapered terminals were rotated 90° to arrive at the final form.

As early as 1825 the Italian was being vilified in print. In Typographia, Thomas Hansard called the type forms a contrivance and a “typographic monstrosity.” The condemnation continued well into the twentieth century. In 1934, A. F. Johnson called it a “freak type,” while in 1938, Nicolete Gray, in 19th Century Ornamented Types, stated that the Italian was “a crude expression of the idea of perversity.” John Benson & Arthur Carey wrote it off as “degenerate” in 1940. Showing that time heals all — or at least many — wounds, Walter Tracy in 1986 rationalized that the Italian was created in a “spirit of play,” and that it was “not meant to be judged in conventional aesthetic terms.”

A story of increments

Nicolete Gray and Rob Roy Kelly both acknowledge that the first showing of the face was in England by Caslon & Catherwood, but Gray tentatively attempts to push the date back earlier with a reference to an assertion by French type scholar Francis Thibaudeau who wrote in his 1921 Le Lettre d’Imprimerie that the “Italian was introduced in the French First Empire [1804–1814].” Thibaudeau seems alone in this assertion and does not credit any French foundry with the origination of the type. In my investigations so far I have found no evidence of examples earlier than Caslon & Catherwood’s.

Caslon & Catherwood first show the Italian in two sizes: 5-line Pica (60pt), and a 2-line Great Primer (36pt) in 1821 and introduce a larger 7-line Pica (84pt) in their 1825 type specimen book. At this early stage of development, Caslon & Catherwood was the only foundry to show specimens of Italian, until 1826 when Star, Little & Co of Albany, New York showed the first foundry Italian in America in two much smaller sizes, a Great Primer (18pt) and a Pica (12pt) while a Two-line brevier (32pt) and a Two-line non-pareil (14pt) are listed on the pricing page. The second English firm to show the face was Bower & Bacon & Bower in their foundry’s 1828 type specimen book. In 1830 Caslon & Catherwood expanded the stylistic range of the face by introducing an Italian Shaded along with three new sizes of plain face from ~22pt down to ~10pt.

The first French specimen with a confirmed date is Laurent & Deberny’s 1835 broadside specimen showing the first instance of an Italian Open Shaded. This was followed with a broadside the next year showing five sizes of plain face Italian from 54pt, with slight formal variations to the capital E and A, down to 8pt, which was the smallest size of the face to date.

In 1837, the first Italian wood type was developed in America and was shown in two sizes 20-line Pica (240pt) and 8-line Pica (96pt) in Debow & Leavenworth’s only specimen book. This was the same William Leavenworth who in 1834 successfully combined Darius Well’s Lateral Router with a Pantograph making it possible to mass produce wood type. George Nesbitt, another American wood type manufacturer, showed an Italian and an Italian Open Shaded in his wood type specimen book of 1838. Darius Wells bought out Debow & Leavenworth in 1839 and the new company, Wells & Webb, subsequently showed Italians in their 1840 type specimen book, along with the introduction of a 7-line Pica (84pt) Gothic Italian. Rob Roy Kelly contends that this sans serif face was an early example of a type originating in wood before being copied for production as metal type. 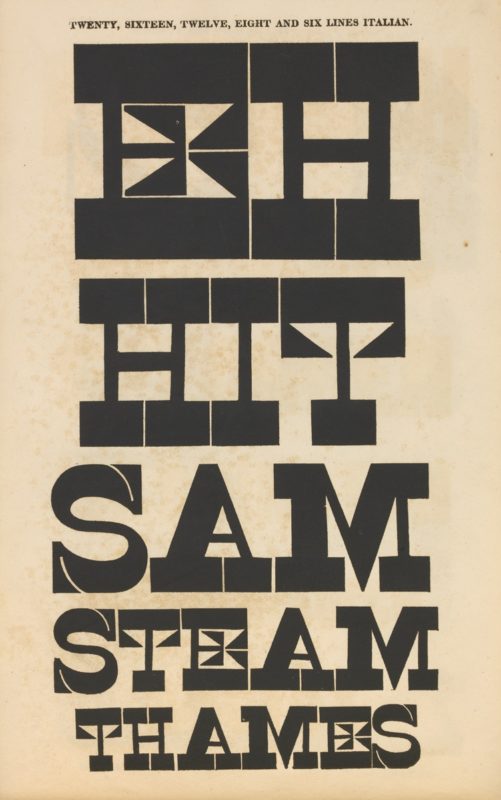 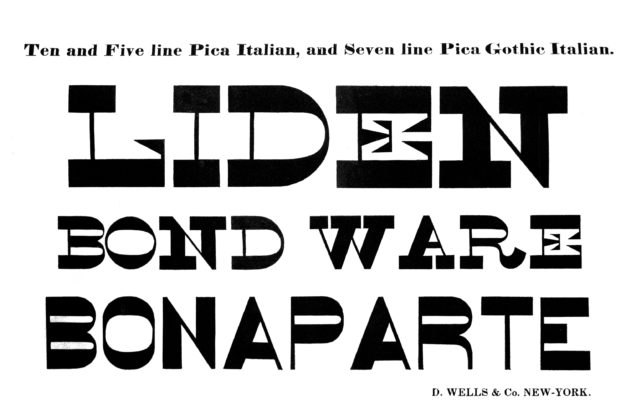 Specimen of Plain and Ornamental Wood Type, Cut by Machine, by Wells & Webb, (Late D. Wells & Co) . Of special note is the inclusion of the Gothic Italian which was first shown as wood type by Wells & Webb. This specimen held in the American Type Founders Library Collection, Rare Book and Manuscript Library, Columbia University.

In 1846 the English foundry of Vincent Figgins released the first lowercase set for the Italian, which corresponded to a more condensed uppercase. This is the last of the English type founders’ contributions to the development of the Italian form.

The American foundry Conner & Sons first introduce Italians to their types, along with the lowercase following Figgins in 1852. In 1854, Wells & Webb introduce the unique Gothic Tuscan Italian another example of a face originating in wood before being introduced in metal according to Kelly. In their 1855 type specimen book, Conner & Sons greatly expand their Italian types offering a unique Italic, Back Slope and Extended as well as a greatly refined roman form. Conner & Sons included these types in their specimen books until 1885 and are the only foundry I have found to offer them after 1860. The refinements in the 1855 specimen book are the last incremental refinements to the Italian form of any foundry or manufacturer. 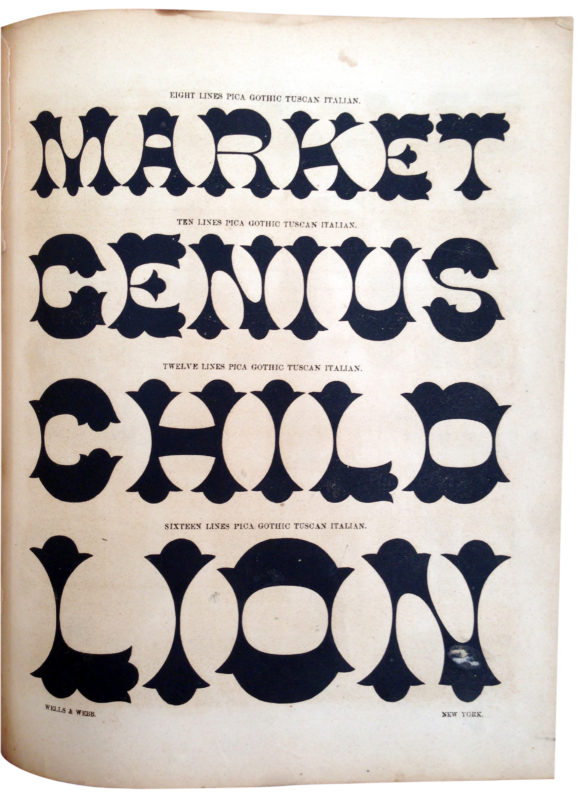 Out of the Italian developed a much more refined semi-ornamental display face, the French Antique. The French Antique adopted the strengths of the Italian, namely the predominance of the horizontal visual stress, without assuming the idiosyncratic details of the turned tapers. Nicolete Gray declared it “a surprisingly winning and unpretentious type.” The French Antique was first introduced by the English foundry of Robert Beasley in 1854  and gained enormous commercial popularity as it spread quickly to continental Europe and America. It became the dominant display style of the mid-1860’s until the end of the 1880’s, with an expansive range of stylistic variation. These types today above any others are seen as visually signifying the American Frontier at the end of the nineteenth century and are typically referred to as “Wild West” or “Circus” types.

The vogue for horizontal stress first introduced in Caslon & Catherwood’s Italian of 1821 and gained tremendous popularity in the French Antique in the latter half of the nineteenth century would finally fade by the turn of the century as tastes turned toward less eccentric forms.

Postscript to the original article

I first presented this research of 19th century reversed stress type at the Plus International Design Conference, in Birmingham, England, on October 18, 2007, under the title “The Grotesque Italian, a visual examination of radical historic form.” I was lucky enough to meet and strike up a conversation with Simon Loxley, editor of Ultrabold the Journal of St Bride Library. That conversation led to his kind invitation to write an article based on my presentation. This article was originally published in Spring 2008.

Shortly after the publication of this article, James Clough published an excellent article on the same subject. “The ‘Italian’ Monstrosity” appeared in the first issue of Tipotalia published by Tipoteca Italiano. The publication of both of these articles roughly coincided with the begining of the current revival of interest in the reversed stress typographic form. There are now a number of digital versions of the Italian available on the market, and more people writing about the topic — David Jonathan Ross’ Backasswards, Peter Bilak’s Beauty and Ugliness in Type Design, Kris Sowersby’s The Development of Maelstrom, and Bethany Heck’s lively review of Maelstrom at Font Review Journal. 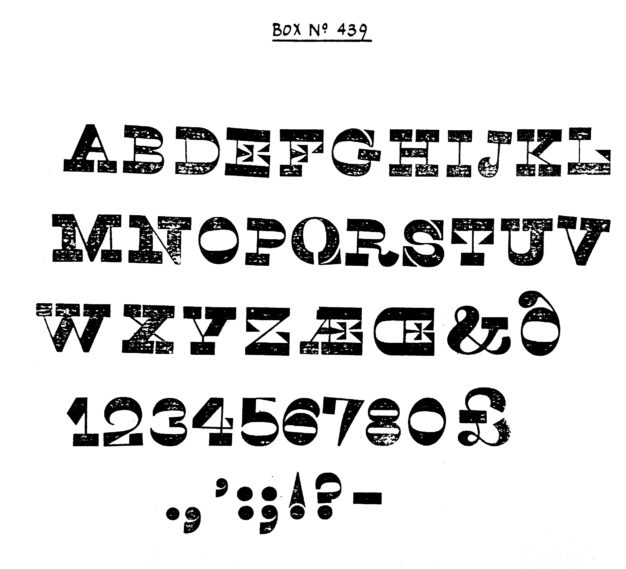 Smoke proofs of punches for Caslon’s Italian made by the Monotype Corp in 1937, and now held at St Bride Library in London. (Note that the ‹ C › and ‹ Q › are in the incorrect position and orientation.) 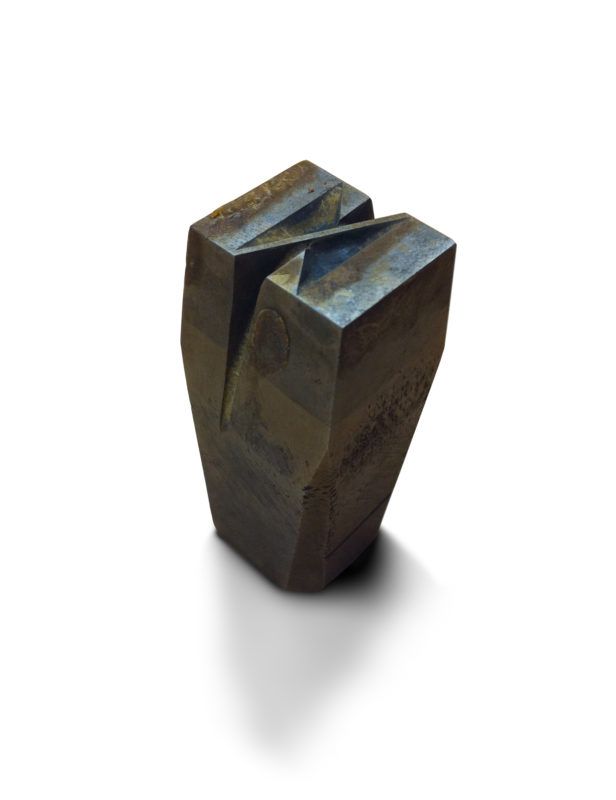 This article was originally published as “A Short History of the Italian.” Ultrabold the Journal of St Bride Library, Spring 2008, 22–27.