William Hamilton Page was born in Tilton, New Hampshire on March 14, 1829, to James and Jane Greenleaf Page. Page spent his childhood on a farm in the Connecticut River Valley and over the course of his adult life would become arguably the most influential American wood type manufacturer of the nineteenth century. 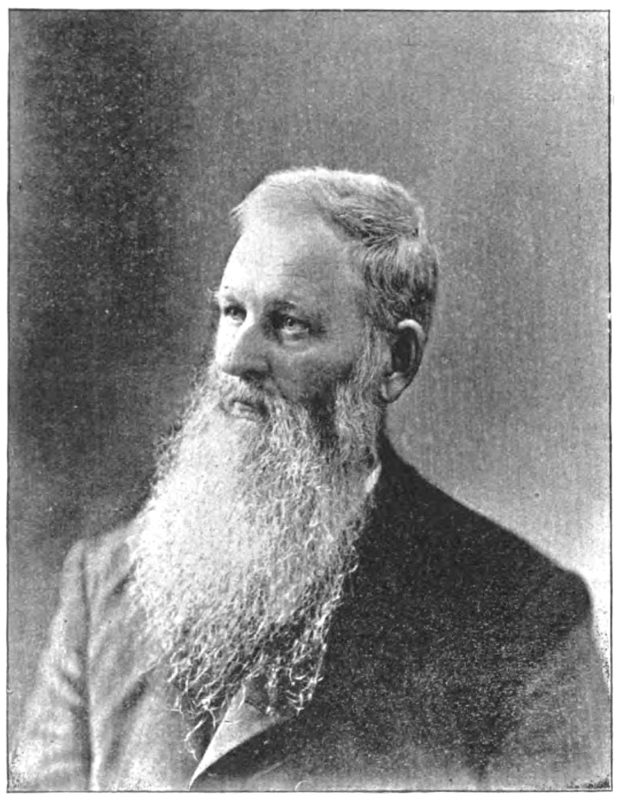 In 1843 at the age of 14, Page started work as a printer’s apprentice in Bradford, Vermont. Over the next six years, he moved from printer to printer in towns and cities in the region including Newberry, Connecticut, Haverhill and Concord, New Hampshire, and Boston, Massachusetts. Sometime in 1849, Page moved to Worcester, Massachusetts, where he worked for two years as the shop foreman printing The Daily Spy ((The newspaper changed its name while Page was an employee. The Daily Spy (1845–1850) became the Worcester Daily Spy (1850–1888). William Loy in his article “Designers and Engravers of Type” in the February 1899 issue of The Inland Printer, indicated that Edmund Clarence Stedman was editor during this time.)) and then spent a year as a writer for the newspaper. In 1852, he moved to New York City to work at the New York Tribune under the renowned editor Horace Greeley during the Franklin Pierce presidential campaign. The following year Page moved to Norwich, Connecticut to work at the Norwich Tribune. Over the next two years, while working for the paper, Page would take up wood engraving, and in February 1855, he moved to South Windham, Connecticut to work as a type trimmer and cutter, manufacturing wood type for John Gaines Cooley. 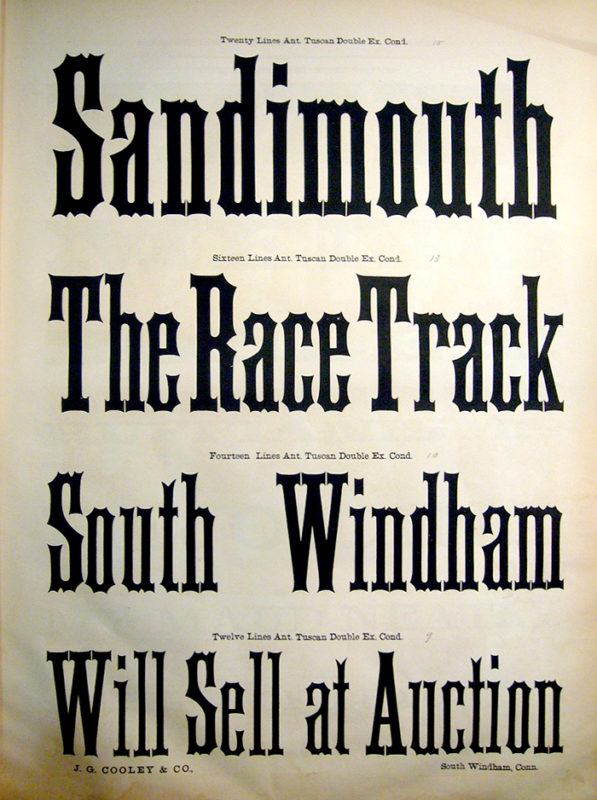 In September 1856, Page left the employ of J.G. Cooley and partnered with James Bassett to purchase the defunct wood type manufactory belonging to Horatio and Jeremiah Bill of Willimantic, Connecticut (a town three miles northwest of South Windham). The business, known simply as H & J Bill, had failed in the fall of 1854 and was shuttered by that winter. It is as yet unclear if Page moved the equipment to South Windham, or if the equipment was put to use in Willimantic. In October 1857, Page returned to Norwich (13 miles southeast of South Windham) when Page & Bassett moved its wood type manufacturing concern to Greenville, the business district of Norwich. In Greenville, Page & Bassett enlarged the company’s production capacity in the warehouse owned by Samuel Mowry of the Mowry Axle & Machine Company. In 1859, the business name, Page & Bassett, was changed to William H. Page & Co when Samuel Mowry bought out James Bassett’s ((In December 1871, the article “Wood Type – Its History and Manufacture” in Printers’ Circular, (p 420–421) reported that “Mr. Bassett, is now interested with the task of preparing wood for Vanderburg, Wells & Co” in New York City.)) shares. 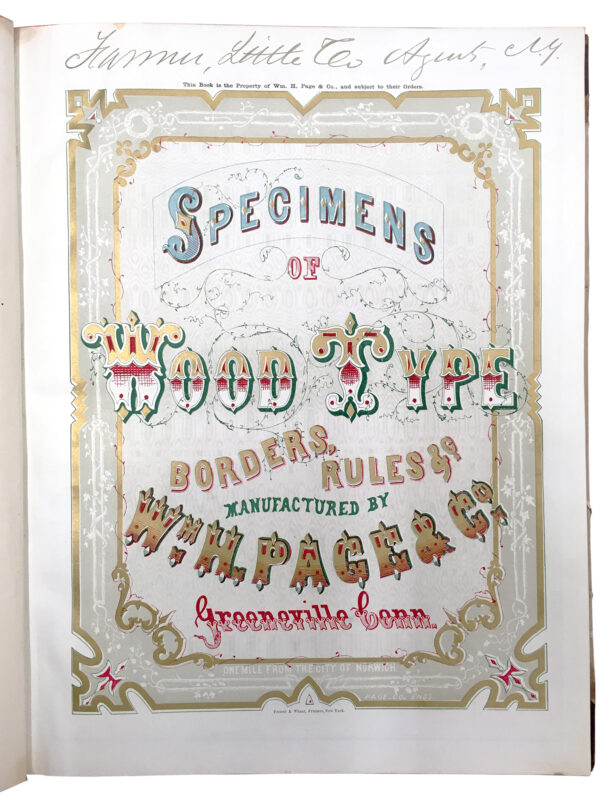 Page was an active inventor and was granted patents on a number of inventions and improvements to products across a range of industries over the course of his life. His first awarded patent was for the design of a condensed German script — US Design Patent 1,869 awarded on November 24, 1863. Page was also a forward-thinking businessman for his time. Rob Roy Kelly writes that “…during the Civil War, Page had hired women because of the manpower shortage and finding them so adept at many of the operations in the manufacture of wood type, he continued to hire women regularly until the business sold in 1891.” ((Kelly, Rob Roy. American Wood Type: 1828–1900, Notes on the Evolution of Decorated and Large Types and Comments on Related Trades of the Period. New York: Van Nostrand Reinhold Company, 1969: 44.)) 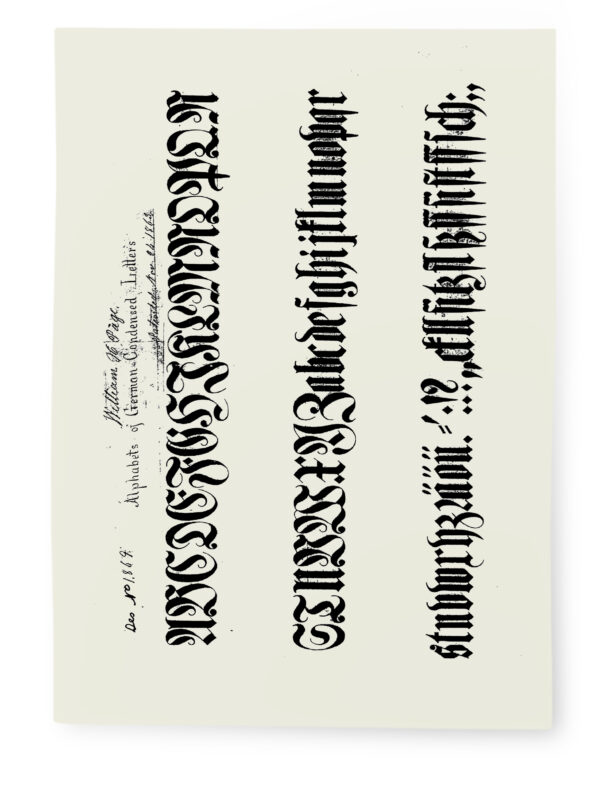 In 1869, Page acquired the wood type manufacturing portion of his former employer’s business. Cooley & Dauchy, as it was by then known, was located in New York City. Samuel Dauchy would retain the other components of the business and continue in New York under the name Dauchy & Co Printers’ Warehouse & Advertising Agency. The new company would act as an agent for William H. Page & Co’s wood type sales in the New York region.

Portion of factory building likely used by Page and Mowry between 1870–1876.

In 1871, Page started a non-printing-related business: Page’s City Gardens. William Hovey, Catherine’s younger brother, was listed as the agent for the concern. The gardens produced fruits & vegetables, maintained hothouses for fresh flowers, and included a modern dairy farm. Records indicate that the gardens flourished well into the 1880s. In the 1873 Norwich City Directory, William Page was also listed as the vice-president of the Norwich Horticulture Society. 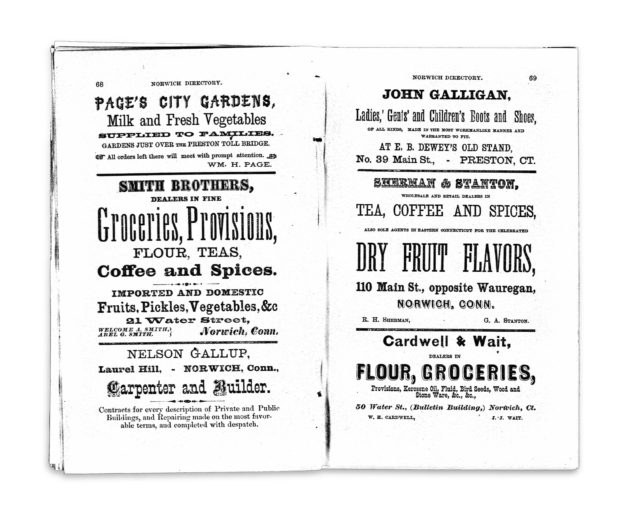 Among the numerous type and ornamental borders he patented (and is credited with designing), Page was also successful in developing and marketing a range of chromatic wood types. Chromatic types were designed to create a multi-color letterform achieved through over-printing in multiple press passes. These type blocks, produced in register as corresponding pairs, were designed so that when printed over each other, created a third color where the forms overlapped. Chromatic types were shown regularly in type foundry specimen catalogs of the 1840s and 1850s and were first produced as wood type by Edwin Allen and shown at least as early as 1841 in George Nesbitt’s Fourth Specimen of Machinery Cut Wood Type. Chromatic wood type would reach its expressive high point with the 1874 masterpiece Specimens of chromatic wood type, borders, &c. manufactured by Wm. H. Page & Co. Greeneville, Conn. — arguably the most beautiful wood type specimen catalog ever produced. (Aditional information about specific designs of Page’s chromatic types written by me can be found here, here, and here.) 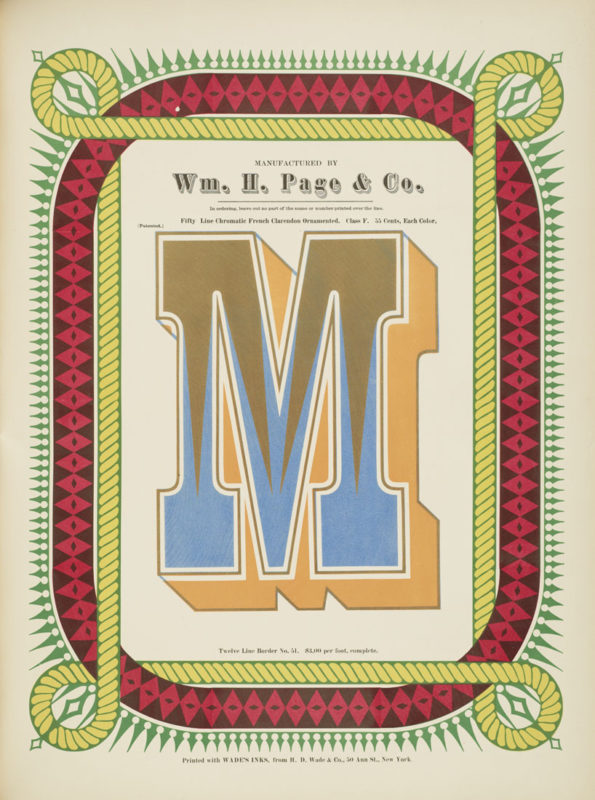 Beyond wood type, printing equipment, gardening, and dairy farming, Page also became interested in the building of boilers and steam heaters. In 1876, Page incorporated a new business, the William H. Page Boiler Co, and named Samuel Dauchy of New York, president. After Page patented a steam heater in 1879, he founded The Page Steam Heater Company. William Page was listed as president and William Mowry (Samuel Mowery’s younger son) was listed as secretary and treasurer. The patenting of a steam radiator in 1882, led Page to establish The Combination Company, a steam heating supply business. In May 1883, Page also incorporated The Victor Heating Company with $24,000 in capital stock. Page was listed as the president of the company, and the address matched the address listed for the Wm. H. Page Wood Type Co. — 112 Franklin Street in Norwich. 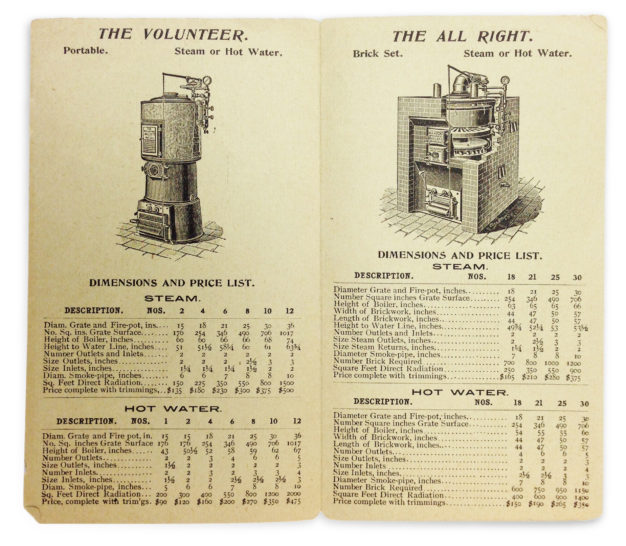 In January 1887, William Page wrote a letter to William Baker of Hamilton & Baker in Two Rivers, Wisconsin. The letter broached the subject of the Wisconsin concern acquiring all of Page’s wood type manufacturing capabilities. Page wrote that he was interested in exiting the wood type business to more fully engage in the lucrative boiler and steam heat businesses he had created. While it is not particularly clear who first initiated the buy-out talks, the letter clearly revealed that the William H. Page Wood Type Co. actively pursued the merger. The letter also included interesting details of Page’s acquisition of J.G. Cooley’s wood type company in 1869.

The letter must have been met well because, by 1891, William Page completed the transfer of his wood type business in its entirety to J.E. Hamilton. By all accounts, Page was very successful at the boiler and steam heater business. He continued to be awarded patents for his technical ingenuity over the subsequent fifteen years.

In 1901, the Page Co. was incorporated with William Page as president. It is not entirely clear if this company produced any new products or was set up to oversee the licensing of Page’s patent portfolio to manufacturers on the east and west coast. Though it is not clear what involvement he had in the company after the early 1900s, The William H. Page Boiler Co. would continue to be a successful manufacturer of heaters and boilers as late as 1932. 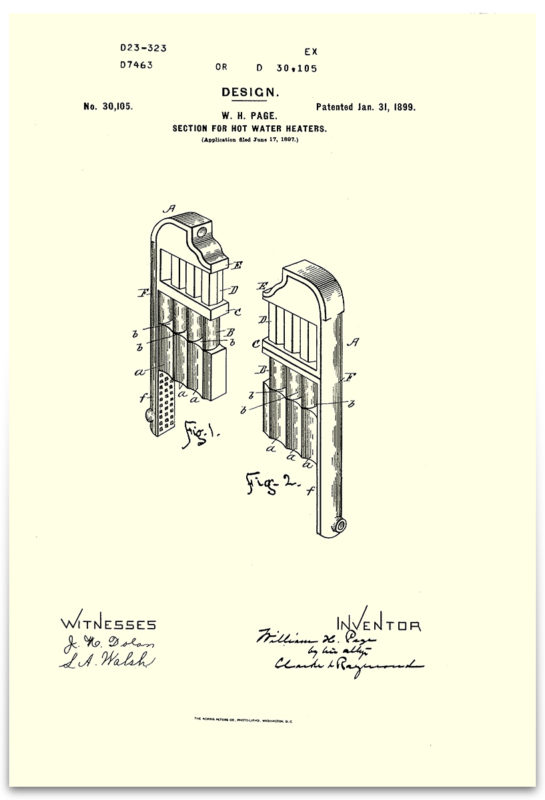 Rob Roy Kelly indicated that Page established the New England Boiler Company in Mystic, Connecticut in 1905, and moved the company to New London in early 1906. Kelly also wrote that “[a]t the time of his death [in May 1906] he was scouting a new location for his boiler company in Norwich.”

Page passed away unexpectedly in Mystic, Connecticut May 8, 1906. There was a glowing obituary for Page published in the July 1906 issue of The Inland Printer. “His habits were perfect and he possessed a most amiable disposition that made friends of all whom he met. He has given employment to hundreds of people and always a fatherly interest in his help. He was generous and extremely charitable. As a general thing others than the deceased profited by his skill and talent. Still, he did not complain and persevered to the end. His home life was happy. Mr. Page’s many friends were surprised and grieved to hear of his sudden death, and know that the world is better on account of the example of his life.”

Kelly wrote of Page “a remarkable individual, [he] was capable, charming, and generous to a degree not always found in the commercial world of the period.” “His continued aim for perfection in all matters that captured his interest should be admired.” 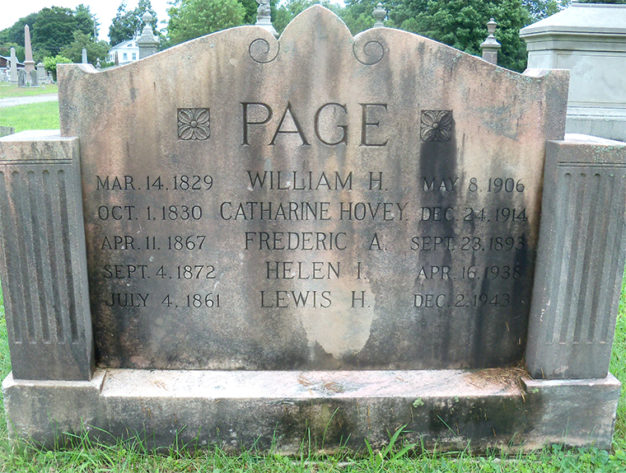