2019 marks the 50th anniversary of the publishing of Rob Roy Kelly’s pioneering text American Wood Type 1828–1900, Notes on the Evolution of Decorated and Large Types and Comments on Related Trades of the Period. The book was officially published on 13 October 1969. 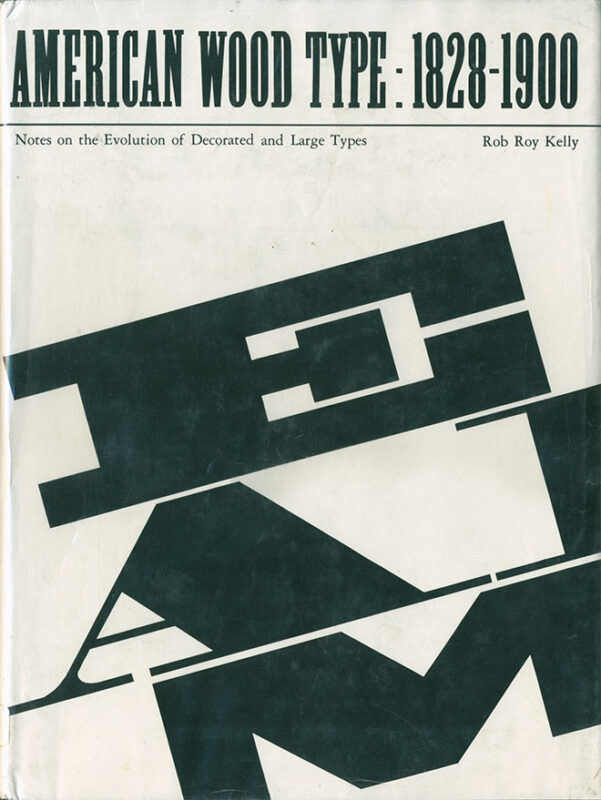 The book received glowing reviews in the trade press and established Kelly as the pre-eminent expert in the field.

James Eckman — the noted historian of printing and typography, author of number of histories of American type foundries{1}, and well-regarded printer through his Doomsday Press — had corresponded with Kelly starting in the mid-1960s. Eckman wrote to Kelly in response to having received an advance copy of the book, “I must thank you profoundly for your kindness. … [the book is] unique because it has no predecessor and, it seems to me now, no possibility of emulation in the future. The publishers have done handsomely indeed by you…”{2}

Alexander Lawson — who taught typography at Rochester Institute of Technology from 1947 to 1977{3} — wrote a review of the book in his regular column “Typographically Speaking” for the February 1970 issue of Printing Impressions. “[a]t long last the craft of the printer, as specifically related to the design, manufacture and use of wood types, has found its Updike.” The review was a testament to Kelly’s work and ended with the statement “[v]isually, this book is superb, and it is backed-up by well-documented historical data. The combination will undoubtedly make it the classic book on the subject.”{4}

The book was received favorably outside of the US as well. It was reviewed in the May 1970 issue of The British Printer “There have been many books related to type and printing which have been sought after and prized by Americans. Here, at last, is one which we should be glad has come to us, at whatever sacrifice of transport, shelter or marital harmony, from the other side of the Atlantic.”{5} 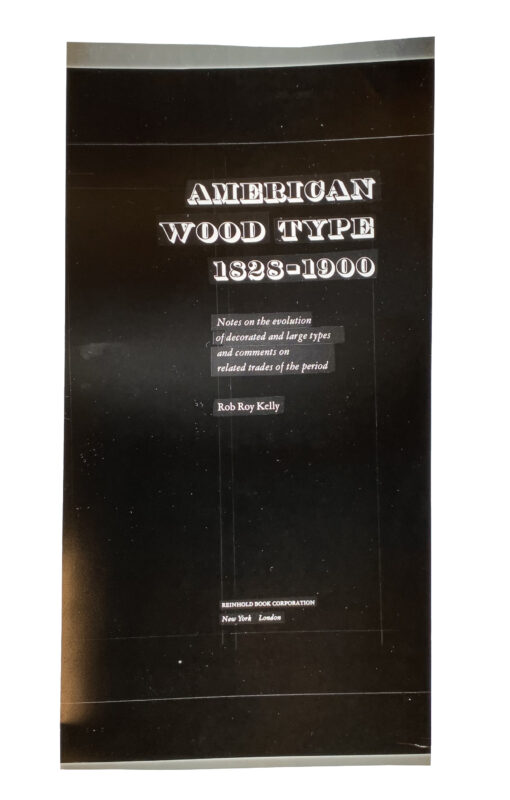 After Kelly had written and designed issue No 56 of Design Quarterly that was published in 1963, and completed the hand-printed folio American Wood Types, Volume 1 in 1964, he was approached by Jean Koefoed, the Director of Trade Publications at Reinhold Book Publishing company about publishing a more complete history of American wood type. Kelly agreed and began preparing the manuscript late in 1965, with expectations of publishing the book in the fall of 1966. The original publishing date was shifted from the fall of 1966 to the fall of 1967. The publishing company went through a series restructuring mergers and acquisitions during this period that further slowed the process. The slow progress of the book project then abruptly shifted at the end of 1968 when the newly reorganized company Van Nostrand Reinhold established a firm publishing date of fall 1969. The pace of the project changed drastically and by the spring of 1969, writing and editing had been completed, and design and production began. The book went to press late summer of 1969 and was then officially published 13 October 1969. 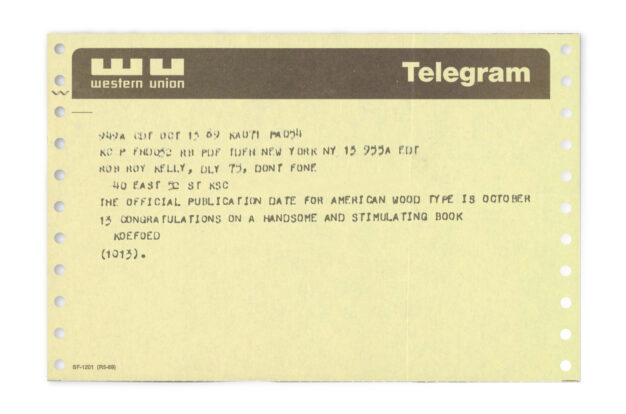 The final published version of the book included 106 pages of full type specimens showing the dominant rage of styles popular in America in the 19th century. Of these 106 specimens, 92 came from Kelly’s own collection of wood type. Five were proofs of types from the Elrie Robinson-Pforzheimer Typographical Collection, then held at the New York Public Library; seven were proofs from the wood type held at RIT, as well as Roger Remington’s personal collection; and one proof was from the collection held at Yale University, Kelly’s alma mater. Curiously, one proof — labeled Gothic Expanded Bold Face by Kelly — did not include any indication from which collection it originated. Kelly also included the most comprehensive bibliography of wood type specimen catalogs compiled at that time. The book listed 70 known American specimen catalogs, and the archives in which each was held. 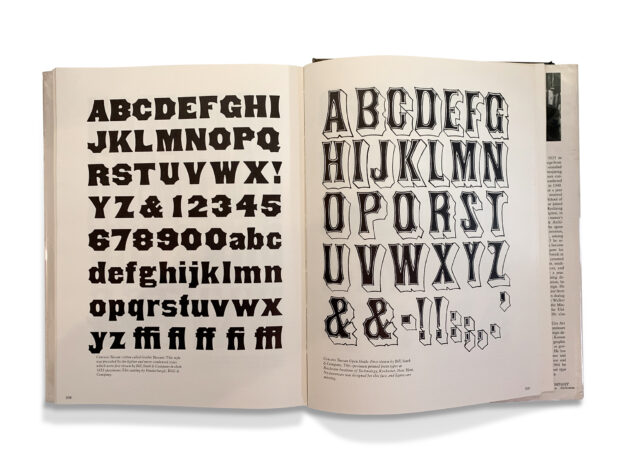 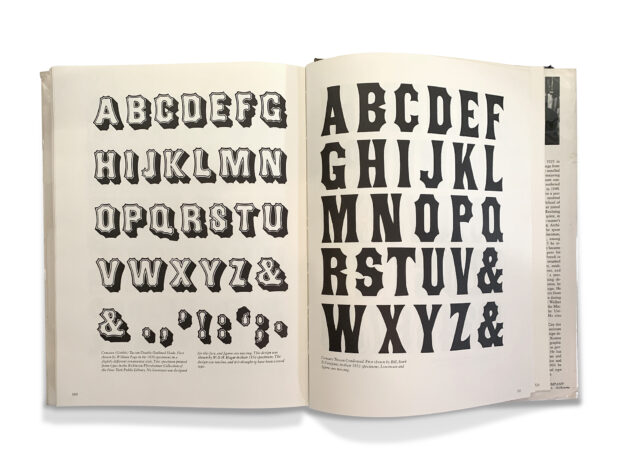 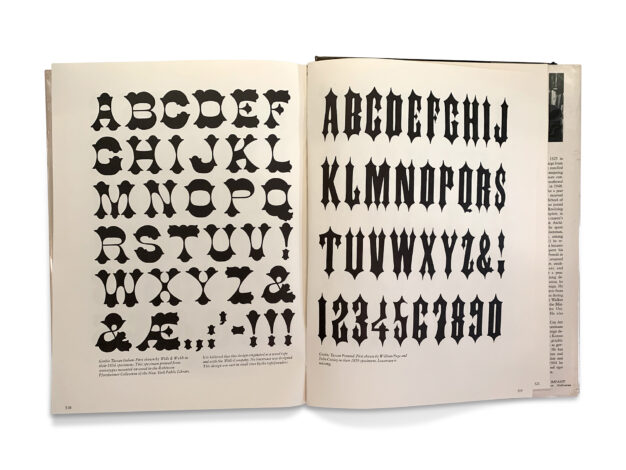 Da Capo Press of Boston, through an agreement with Van Nostrand Reinhold, publish the paperback edition of American Wood Type: 1828–1900 on 1 June 1977. 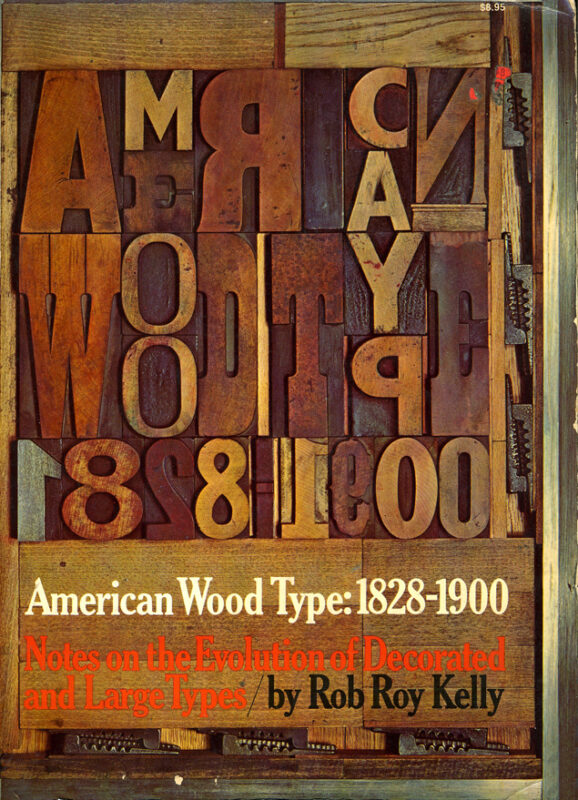 Matt Kelsey of Liber Apertus Press published a reissue of the paperback edition of American Wood Type 1828–1900 in April 2010. This reissue continues to be available as a print-on-demand volume. 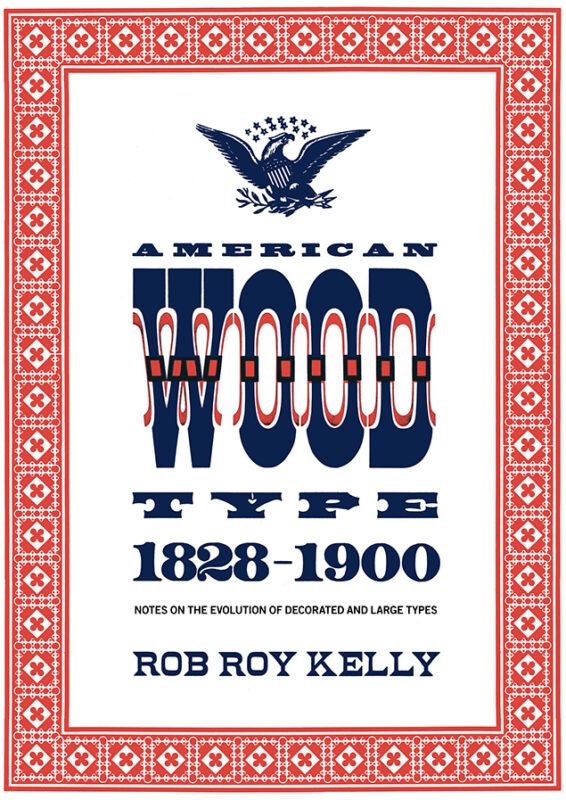